Skip to main content
on May 10, 2013
Series: Sean O'Hagan on photography
Why you are the future of photography


A new show suggests that webcams, Google Street View and a cat named Nancy Bean are set to change the world of photography as we know it 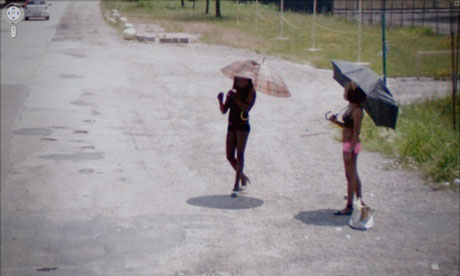 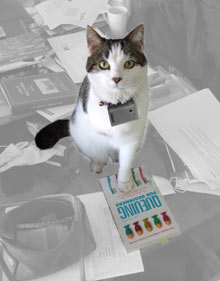 Their manifesto begins: "Now, we're a series of editors. We all recycle, clip and cut, remix and upload. We can make images do anything. All we need is an eye, a brain, a camera, a phone, a laptop, a scanner, a point of view."

From Here On is the title of this manifesto-cum-group show unveiled at last week's Arles photography festival. It is, the curators insist, a glimpse of the future of photography. Or to be more precise, several glimpses of several possible photographic futures based on the premise that photography as we know it – whether reportage or documentary – is no longer the most viable way to make sense of a digitalised and increasingly atomised global culture.

The manifesto was created by five people: Clément Chéroux, a historian of photography and a curator at the Pompidou Centre; Martin Parr, photographer, collector and all round dynamo; Eric Kessels, founder of the KesselsKramer communications agency; Joan Fontcuberta, an art photographer; and Joachim Schmid, an artist who works with found photographs.

The internet and the cheap digital camera, they say, are radically altering how we see the world, and what we do with what we see. No arguing with that. The fast-forward momentum of digital technology "changes our sense of what it means to make" and "results in work that feels like play, work that turns old into new, elevates the banal. Work that has a past but feels absolutely present."


The elevation of the banal is one thing that the internet specialises in – from dancing pets to live webcasts from the living rooms of ordinary people leading ordinary lives. Sure enough, the show includes a cat photographer – that's a cat who takes photographs rather than a person who photographs cats. Nancy Bean is a three-legged ginger tabby from Devon who has been fitted with a camera timed to snap an image every minute. The results are variable, as one might expect: lots of views from under cars and out of windows. It is street photography, but not as we know it. Elsewhere, there are real live chickens in cages courtesy of prankster Thomas Mailaender, whose installation, Chicken Museum, is like an edition of Vice Magazine made flesh.

There are also a couple of series based on Google Street View images – Jon Rafman's blown-up, grainy evocations of the everyday, and a series of images of ordinary people pulling faces for the cameras of showroom computers. There are photographs that have been tampered with, added to, edited and manipulated. All the tropes of the digital culture writ large, then. Most of it, perhaps unsurprisingly, already feels all too familiar.

Among the slapdash, the crudely innovative and the downright nihilist, there are some interesting artists. Surveillance and appropriation are two of the key themes. Jens Sundheim's images, often photographs of himself taken on webcams, are painterly in a spectral way, which hints at something darker about a digitalised world of connection and disconnection. Corinne Vionnet finds snaps of well-known tourist sites – the leaning tower of Pisa, Mao's mausoleum – on photo-sharing sites on the web, then layers one on top of another until she reaches an impressionistic photo-painting.

The results are both real and ethereal – just like the mass tourist experience. Pavel Maria Smejkal's FATESCAPES take found historical images of war and devastation and strip them of all human figures. Here, photography is sampling its own past in much the same way that hip-hop did in the early 1980s, but without its heated debate about ownership and royalties.

Monica Haller's book project, Riley and his story, is an unapologetically serious work of political testimony. A collaboration with her college friend, Riley Sharbonno, who served as a nurse in Abu Ghraib prison, it is a brilliant diary-cum–memoir of war, trauma and loss.

These artists stand out amid a welter of the throwaway, the juvenile and the nihilistic that reflects the From Here On manifesto. "We're making more than ever, because our resources are limitless and the possibilities endless ... We want to give this work a new status," the manifesto concludes. "Things will be different from here on ..."

My immediate thought was: well, not that different if it takes a bunch of established curators and photographers to curate – and canonise – the work. Surely this is exactly the kind of cultural commodification that digital culture was meant to undermine, not encourage.

As I wandered, a little dazed, through From Here On, I found myself longing for more curatorial selectivity, more quality control. I was reminded of some words of warning from the internet-historian, Andrew Keen, in an intriguing forthcoming film on digital culture called PressPausePlay. Keen speaks passionately about the downside of digital democratisation: "When you leave everything to the crowd, where everything is democratised, when everything is determined by the number of clicks, you are by definition undermining the seriousness of the artistic endeavour," he says. "There is no evidence that we are on the verge of a great new glittering cultural age, there is evidence that we may well be on the verge of a new dark age in cultural terms … where the creative world is destroyed and where all we have is cacophony and self opinion, where we have a crisis of democratised culture." There was a glimpse of that possible future in From Here On. It was not a pretty sight..