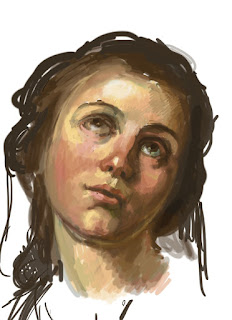 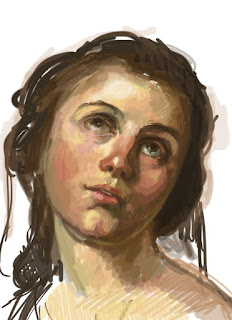 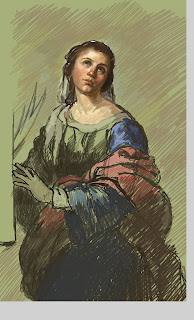 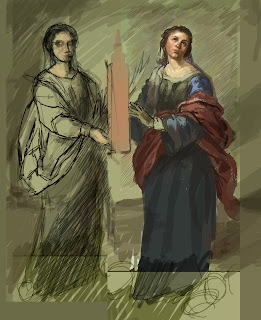 Murillo, besides the famous tenderness of his characters, has a masterful technique, made of unafraid use of color and a confident drawing, which sets him aside among his contemporaries.
In this sense, it wouldn't be strange to think of him in the same vein of Norman Rockwell, as both relish in the charisma of their models and, as said, a perfect technique.
This can be appreciated in his different works, specially those one in the Museum of Fine Arts in Seville. 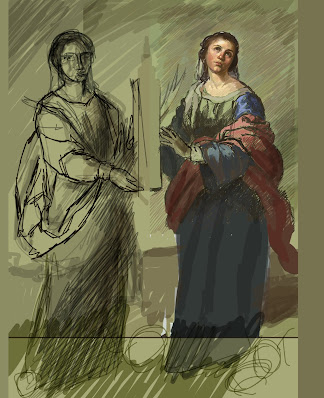 The drawing, the proportion, the lightning, are so solid that  could be considered a serene, quiet  evolution of the Spanish baroque. Even the protoimpresionism or non chalance of Velasquez is left behind. I guess when people talk about academic painting, they rfer to something similar to this, and actually might be the reason why it was so popular at some points of the 19th century. As usual, an artists is at his best in the less famous works; no in the children, as interesting as they could, but in the old saint, the virgins, the men submerged in the clouds of his heavenly scenes. The same could be said of course of Rockwell, if we focus on the technical wisdom of a painter.
Is specially interesting to compare, say, Zurbaran, Ribera or the early Velasquez with Murillo to appreciate those singularities. #adobe #workinprogress #drawing #wacom #photoshop #digitalpainting #murillo #classicallytrained #intuos #arthistory.

This is a copy I started from his double portrait, if we can call it like that, of the saints Santa Rufina and Santa Justa, which are present all around Seville. They appeared to sustain the Giralda when the echoes of the Lisboa earthquake were felt in the city. The piece is in the useum of Fine Arts of Seville, and is a masterpiece, where Murillo shows a confidence and an elegant brushwork in the best tradition of the baroque.
art arte gefercan german fernandez illustration sketch