The power of the new image: Data visualisation and Infographics 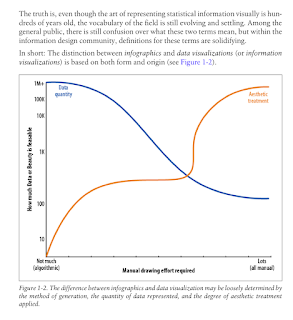 Infographics are each day more common in our vocabulary. Why?. Because infographics are useful for understanding and communicating. Trough understanding something, we can visualize it and therefore produce a graphic. That said,if you can't visualize something, you can't understand it; and probably you need an infographic!. In trying to understand something, you can make a mental image of it, visualize it, and therefore, create a graphic. And then, show and communicate it, making it understandable to others.
Both steps have tricky parts. The first one is all about understanding rightly, and the second one, to cut off ambiguities, to show it to others. Seeing is believing says the adage. But you must see clearly. It is said that the image is related to long term memory and text to short term memory. I relate this to the fact that the image conveys more information rapidly. The text is a large chain of meanings being decoded linearly, building up meaning through sedimentation., from letters to words, from sentences to paragraphs, and so on.
The image conveys a lot of information (colour, size, position) in a small time and appealing to our visual comprehension, the one we have most developed (we are not so good at smell and audition as other species). There is a caveat also. As information theory shows us, any code is as good as the capacity of the decoder channel. This is the attention cost. Being of simultaneous nature, there is a limit to what we can apprehend from the image ( it is our limitation, not one of the image). At a certain point of complexity, an image can be digested trough levels of visual understanding and segmentation. Text and image manage to cover both the spectrum of short and long term and fast and slow recall.
On the page of a newspaper, a curious panorama is offered to the reader, a hierarchy system in the display of information, because in the discovery of the information within the diary page, the first blow, so to speak, corresponds to the image; here we talk about photography for its documentary aura, also appealing to the emotion. At the other end is the text, detailing the news, giving extended information. Between them, at halfway is the diagram half image and half text, being more rational, playing an intermediate step between the impact of the photo and the detail of the story.
There is the question of the moving image as well; a linear (most of the times) narration made with images: kinetic? visual? storytelling. The image is transformed into a text, into a narrative, and the flow of the information must alternate between textual and visual characteristics, according to the rhythm of the narration, but most probably something akin to a musical performance. Visual strikes correspond to highlighted moments, textual flow to the concatenating moments. Although this reflection can take us as far as to the opera and Wagnerian "total work", we should just approach this question and adapt our analysis in relation to interactive and digital, for this kind of graphic making use of the so-called fourth dimension: time.
As what we said regarding the image, the image in motion has a higher attention cost, that works good and great for emotion and shock but has to be threaded with more prudence when the aim is clear comprehension. The image in motion, as the infographic, is a hybrid being, and as such, can mutate from one side of the spectrum to the other according to what is needed to connect the content to the spectator/reader.
Yes, I think it could be said that infographics work in the same way, distributing content into textual and visual elements according to what is needed to the flow of the graphic. However, if in real things there is more than meets the eye, there is also a saying that goes along the lines that "everything is about perception". Sometimes, I remember, in the newsroom, somebody wanted a visual display that "looks like an infographic, you know, with arrows and those things". Sometimes I have found layouts arranged with the appearance of a diagram. Between the mere appearance-which can be just considered a visual trick- and the real thing, there are curious variations.
But when an infographic is not an infographic or a visual display of information where the ratio of ink/information is meagre, we enter a new dimension of meaning, a kind of Panofsky meets Mac Luhan sort of thing, where the object (layout, diagram, etc.) says more because of its shape than its content. A newspaper, of course, is about information. So everything on the page should be perceived as information. And what about an infographic, a chart, a diagram? Is not then, the infographic, the image of our days? These are formats that per se imply information, knowledge, data. This idea of appealing to a container with an aura of "informative" to spread this aura to the content is what interests me here; in the explanation to make our IKEA chairs, in the diagrams to assemble our children's toys, in learning how to use or manage our multiple devices, in the screens of these devices. The rise of infographics is related to the rise of technology in daily life. Infographics, HCI interfaces and other more are the images of our days. All is about information.

The informative image has a double nature, explorative and declaratory, and usually can be roughly spread across two camps, of ideas and data-driven, as Scot Berinato proposes in his quadrant for categorisation of graphics. What is interesting is how this quadrant inscribes within the cycle of knowledge and I would say, the propagation of ideas. Berinato divides its quadrant, broadly, in idea generation, data exploration, data declaration and idea declaration. He enters into a more detailed account of what he sees as characteristic of each part. But I would like to enlist those sectors as part of a progression of knowledge in a continuous cycle: idea generation-data exploration-data declaration-idea declaration, followed by assimilation of this late stage (idea declaration) as a feeding input to the next cycle of idea generations. Each step has an appropriate type of visualization, from diagrams to charts of diverse complexity (in a really audacious rough simplification, diagrams are for ideas and charts for numbers: this is a really unsubtle and gross statement but for now we will use it). An idea generation, helped by scribbles and chalkboard diagrams made in a brainstorming session, lead to questions that usually led to an exploration of evidence, that is data exploration. Nowadays, data exploration is, as Berinato points out, the domain of big data and deep data science. Whatever the complex dealings of this stage, they led to a data conclusion, a statement of evidence, which in turn can serve as a basis for an idea statement and the establishment of paradigms and models of truth. As all paradigm, those established ideas are questioned, giving way to a new iteration of the cycle. An idea statement based on a data conclusion is the space where we believe the symbolism of the image will find its new power.
A BBC documentary featuring David Hockney, shows him explaining the western image creator search for the monopoly of the real, truthful image. He states that this endeavour started in the 15th century to the middle of the 19th. And he points out the similarities between images outside this scope of time: a Byzantine icon and a Van Gogh. In those examples, realism is outside the aim. But we can also point to the data art of nous jours. Which truth are we seeking?. The truth of our perception? Or the truth of our intellect? Which one is more reachable in the time of post data and fake news?
arte data visualization design gefercan german fernandez infographics newspaper statistics