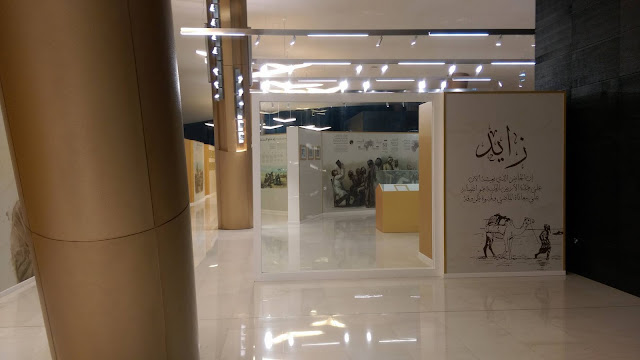 Memory is a tricky thing. It can remain in us, seeming to be at hand most of the days, safely stored in the backroom of our head, ready for us to be searched and picked up when in need. But as it happens with the daily stuff we have sometimes roaming around, the things that we thought were easy to find , just happen to be, one day, gone without trace.  The things that happened in our youth, are fresh in our remembrance, until one day they are not, We corroborate our memories with those who witness them with us, until they are not more.  How do we avoid that? How do communities do that?. Usually these things happen when the generation that witness things at first hand start to disappear. It happened with many traditions of heroes and legends, and  it happened with with the fourteenth century, when Giotto started to depict the scenes of the life of Saint Francis of Assisi.

The image as a vehicle of communication can be said to have tow dimension , the symbolic one at one side (totems, heraldic crest, logs,etc with a higher level of encoding) and the narrative one  at the other (depictions of episodes, lives of saints, graphic novels, etc with a  , lower level of encoding or rather a different one). Usually both worked in tandem, complementing each other. History painting was such a renowned genre in classic painting, I guess because it was a remnant of the need for a collective memory. The first time I saw Giotto's paintings  in Arezzo and Padua, beside the rustic figures, they called my attention the narrative power of his figures.
Building a story of episodes of a new saint, hero, leader or king is part of the history of art. From Saint Francis or  George Washington to Henry IV to Mao Tse Tung, iconography has been built to recreate the life of these hsitorical characters with more or less fortune. So when the opportunity raised to make a book about the founding father of the UAE, the late Sheikh Zayed, we were really excited.
Usually, we said, a generation has passed when these processes of image construction start, and this was not exception as Sheikh Zayed passed away in 2009. There is a need to establish the collective memory , of grasping the essence of history before it vanishes form the living remembrance and can be transmitted to future generations, for whom we are the main vehicle to access what for us was the present and for them is the past.
The case of UAE is very emblematic of this, being a young nation by most modern standards, being founded in 1971. Being launched into modernity at a fast paced rhythm, there is a lot of what we call history taht still remains in oral tradition. This however is not a characteristic of pre-internet times, as any one who want to recall a website from the 90s can attest. Sometimes the present is ingrained in our memory as something at hand, we never believe it can vanish so easily into oblivion.

The Etihad Museum is a modern building of luxurious design, boasting a technological state-of-the-art silhouette shaped by a sinuous roof made to resemble a folded paper, inside which, supported by rounded diagonal columns two levels of illuminated gallery space host exhibitions and events, while an underground hall guard the main collections as well as libraries and conference rooms. The brand-new structure is build next to the recently restored round, one-floor house that in 1971 was the meeting point of the rulers of the Trucial Emirates and was used to sign the definitive agreements for the unification, marking the birth of the new nation. Thus, it is obvious to say the importance of the site is paramount when coming to the symbolism of the country that looks forward to its fiftieth anniversary in 2021.

The exhibitions was held in the first floor of the museum, distributed evenly across a a series of panels with the illustrations printed at great scale.

Now, a narrative cycle need from the practical point of view certain requirements proper to every visual storytelling, the most basic of them, recognition of the characters and the variations of the context even if the episodes are not linked directly as in this case, where Sheikh Zayed is represented in different actions in different places and in different situations (in a school, in a desert etc).
The most difficult part I would say was to maintain the resemblance to the historical figure while recreating scenes of his life, that implied to recreated figures in diverse movements, positions and lightning environments. I worked digitally with a digitla drawing tablet, INTUOS, following the usual process of drawing a lineal image, scanning it and reworking it or using it as a drawing support in Adobe Photoshop.

I didn't use many layers as the technique I used was more akin to working directly with acrylic or tempera, using the brush in "normal" mode and with a 100% of opacity The only advantage I had was the option to undo, the famous crtl z,I would say, and sometimes, cut and paste and resize some parts of the work. I would be adding more pics of the exhibition as I get more of them from my messy digital archive.

On another note, it was really interesting to see how the work scale up-for example in the details of the illustrations as well as in the quality of the printing- usually that can bring unpleasant surprises, but happily, in my opinion, that was not the case here. 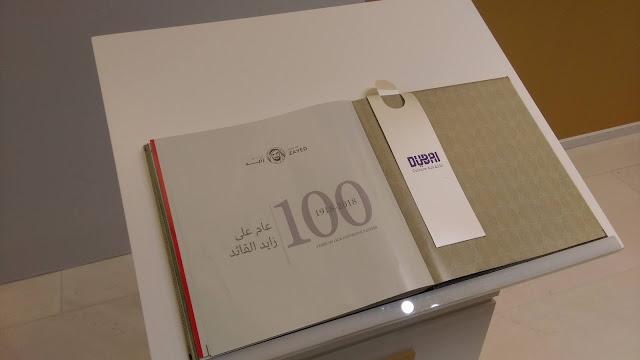 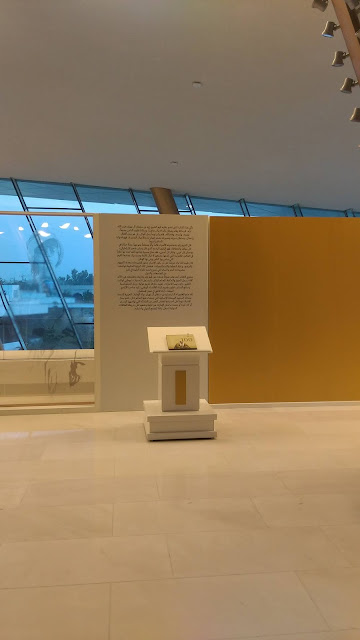 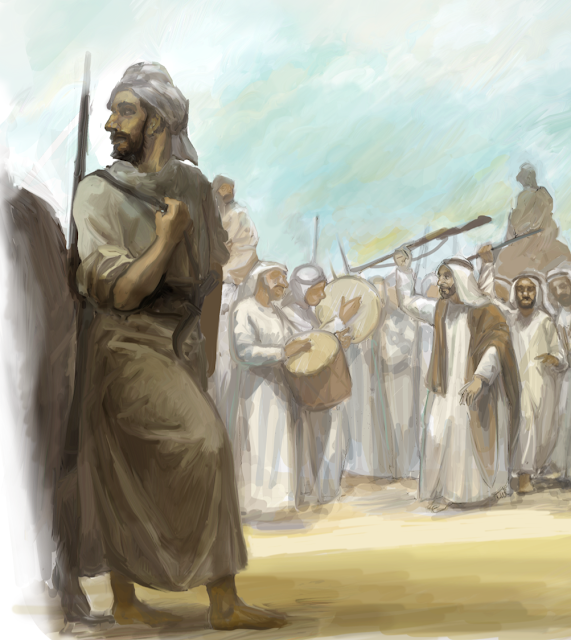 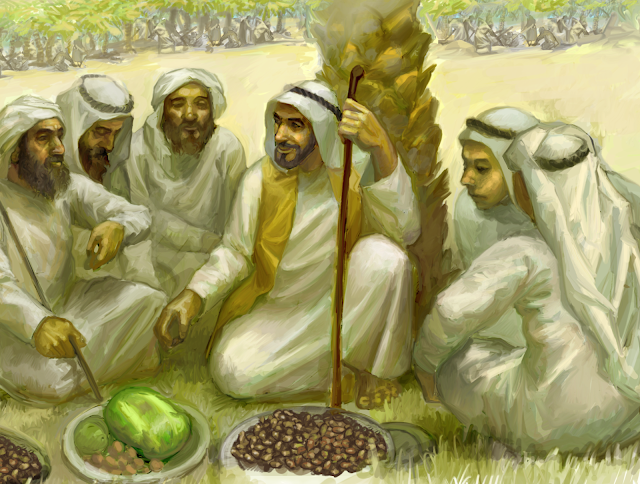 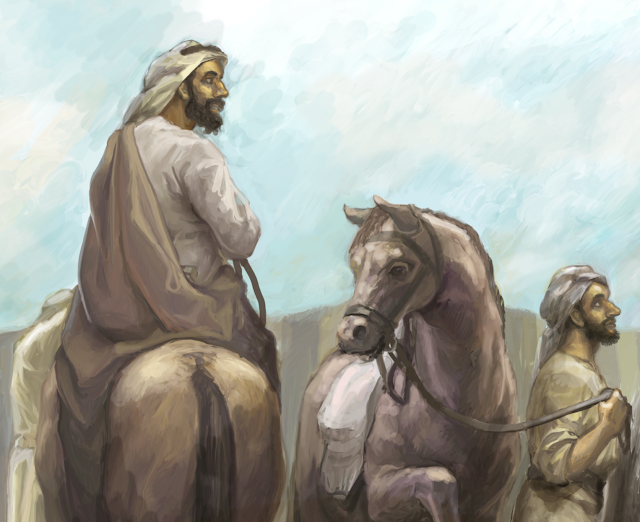 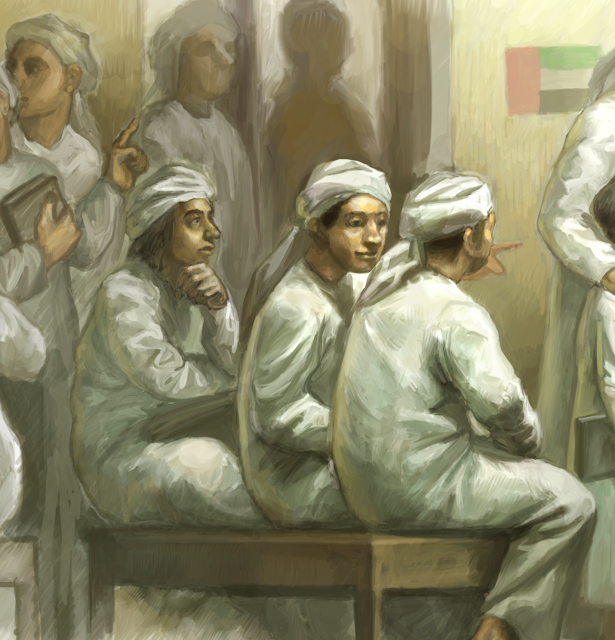 And here some pics of the illustrations in the development stage. I followed the traditional process of drawing them with pen, mainly linearly, so I can scan the drawings and then start coloring them in Adobe Photoshop using my Intuos Wacom tablet. 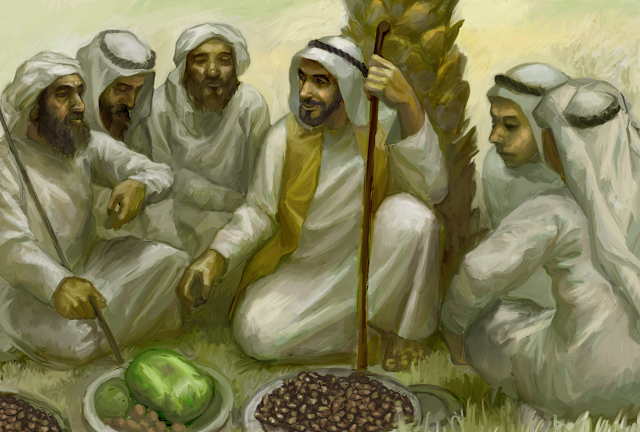 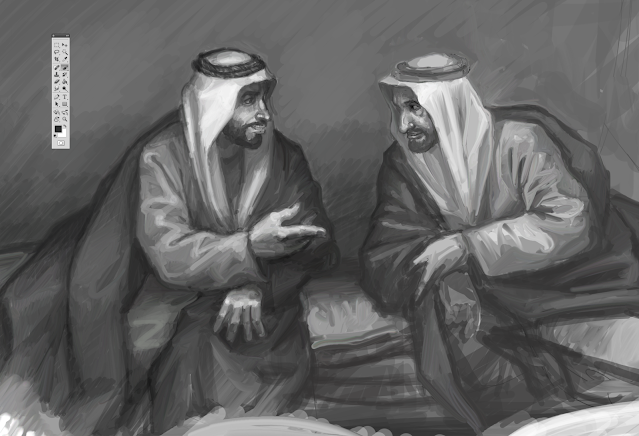 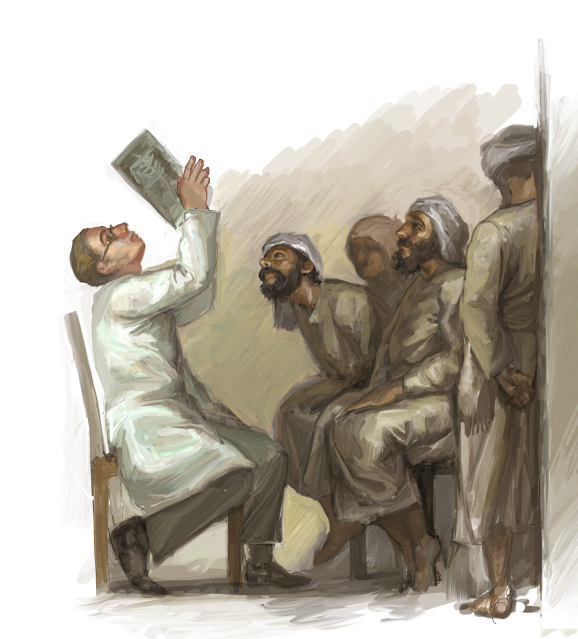 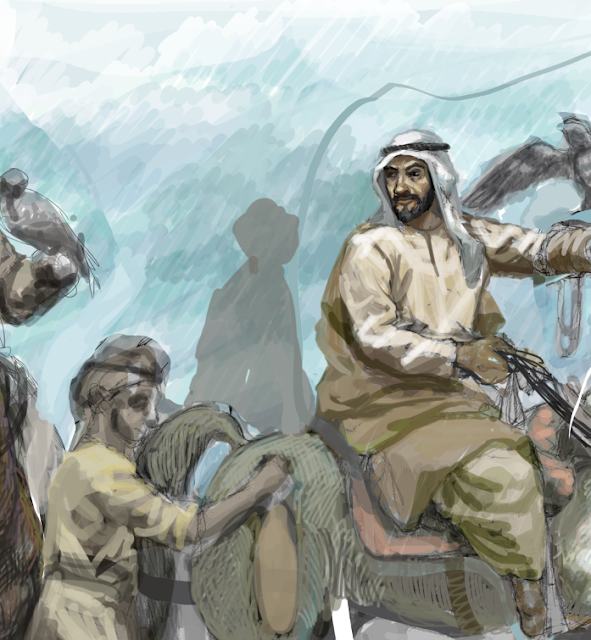 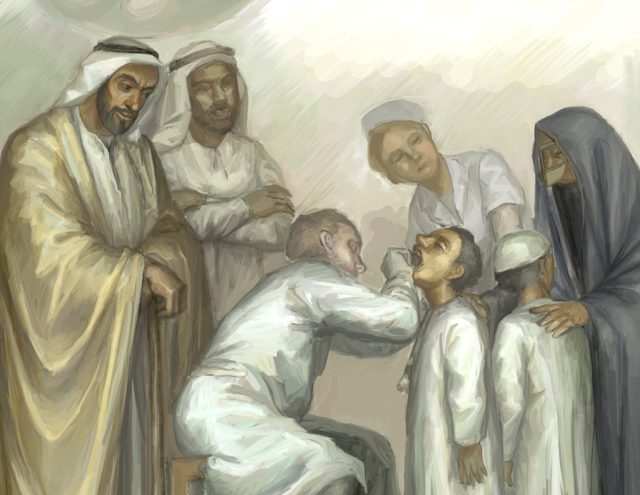 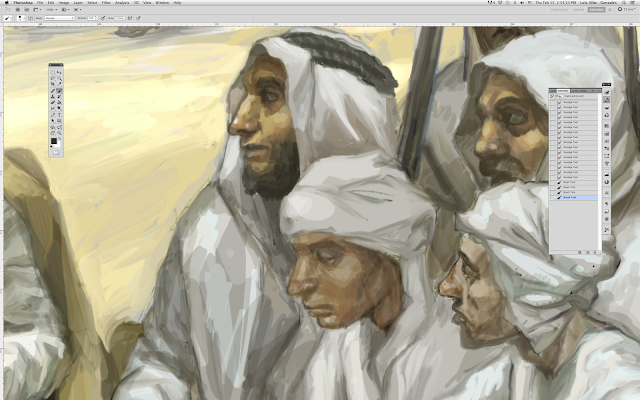 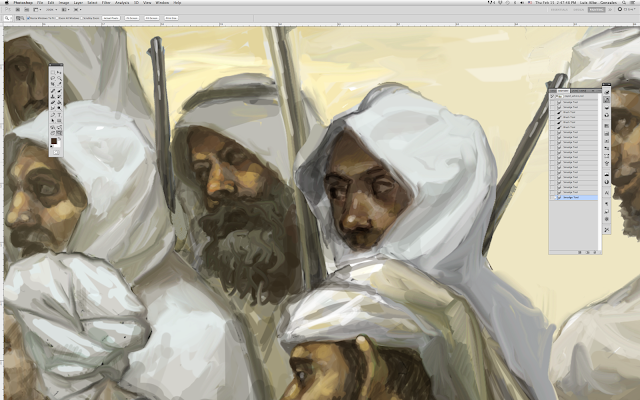 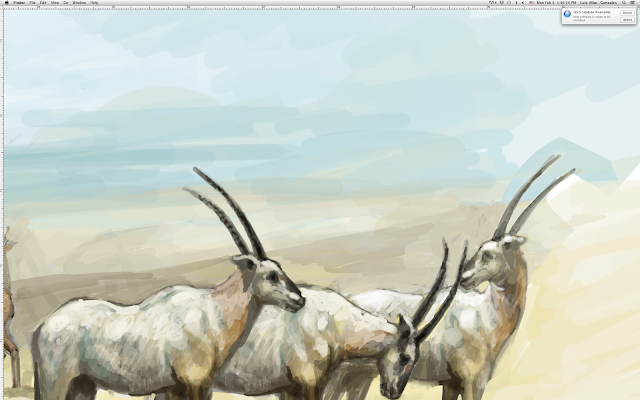 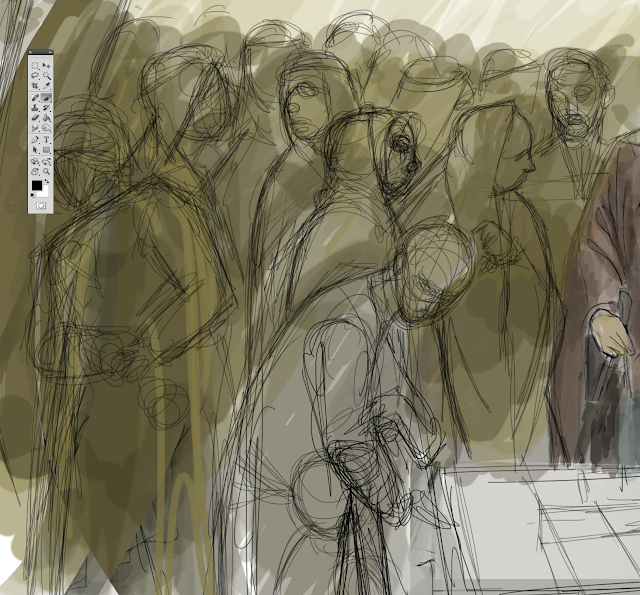 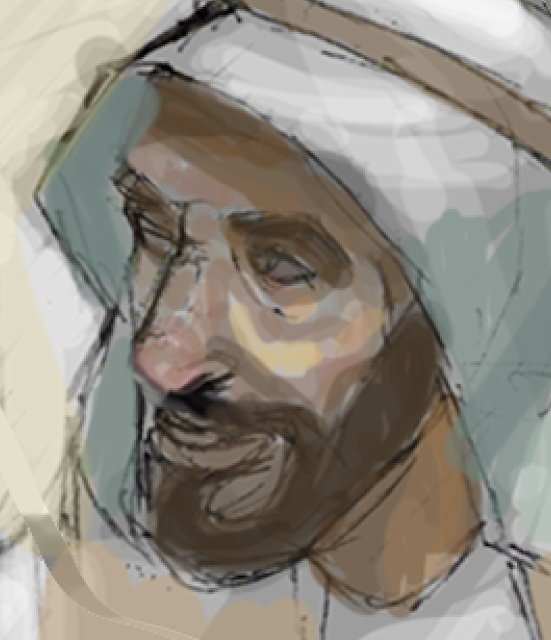 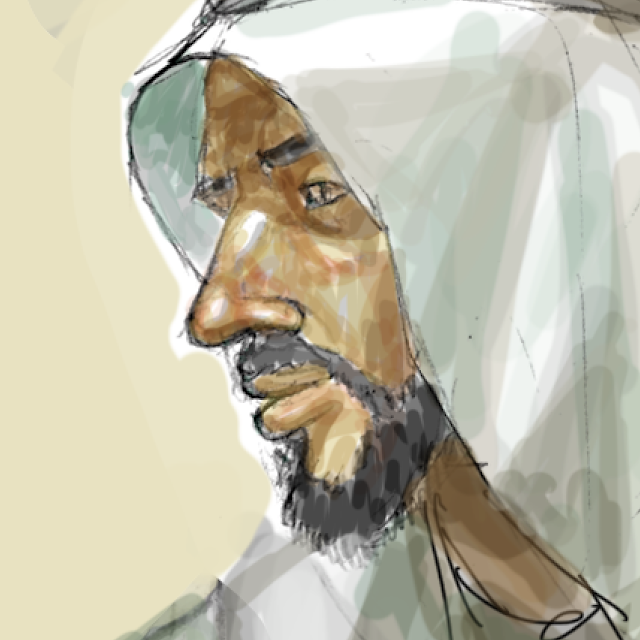 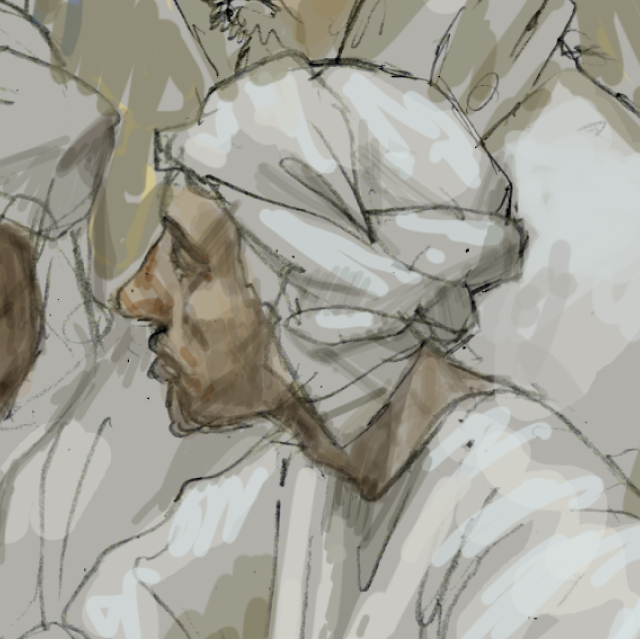