Some notes on change 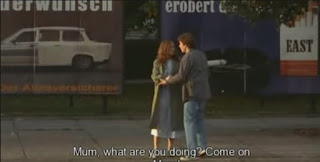 A teacher, who grew up in postwar East Germany, behind the Iron Curtain, falls into a coma, just  to wake up to a reunified Germany, but is  tricked by her son into believing that everything remains the same. Why?.

Because the shock would be potentially lethal, said the doctors. That was the story of the movie Good bye Lenin. In the pivotal scene, the teacher wakes up early, and taking advantage of his son’s heavy sleep, ventures by herself to the outside world, untutored, unguarded. And what she sees is nothing but totally a new world, and strikingly, a flying Lenin, crossing the streets and saluting her while is being removed from the city as the past is being wiped out in each of the aspects that formed her life.

Independently of the reality of the actual DDR, here we want to focus in the individual worldview that was being deleted, what would replace it? And would she be ready for it? What would be her place in this new world? And why? What about what she believed in, what she learnt, what she taught?.

End of the world like this came before in many sizes and shapes, from the conquest of the New World to the Fall of Rome. Storytellers are idolized in some circles and dismissed in others, many times seen merely as entertainers and timekiller performers in the village, as sellers, as trickers, but this idea risks to omit  the fact that stories make us;  that narratives are important, how we imagine the order of the world is important, how we place ourselves in the world is important, the stories we tell  to us are important.

We know this for certain, alas,  but the tangible sense of this escapes from us, submerged in the numbness of the routine, of a myriad of mechanical acts and an implicit notion of thing being the way they are.

Until now. Now that we can’t hug each other, see our loved ones depart, we can't touch them, or gather, show our smiles and sing our songs with the unvalued freedom we did before, now that we feel stranded from our usual selves and crucially, our usual stories.

But in the same sense that the discovery of reality can be shocking, in the same sense thus reality will bring the duty to build the new world to this generation, and to imagine, to create, distort and correct, erratically, the new ways of the future, the touchless reality of the feelings, the love, the hatred, the melancholy and the utter joy of being human for the upcoming decades, as

they will carry our memory through the age of the great reset, to whatever is at the other side of these times.

Spectacle. Bread and circus. The Roman empire extended along a swath of different civilisations across what we call today the Mediterranean Sea. From the little kingdom in the middle of central Italy, shadowed by the Etrurians, to the socio-economic and political mega-corporation of its day, called then an empire, so big for its geography that at the end had to be divided, not without casting a shadow so large that left an impression to successive human enterprises across the centuries. From the lands of the pharaohs to the forest of Galia, they expand their vision, their culture, their lifestyle, their unique amphitheatres and circuses, built in Roman style can be found in France, Spain, Syria, Tunisia and Egypt. Certainly, this style was built from what the Romand took from the Greeks, but were the Romans who left us the idea of the spectacle for the masses as a way of life. To the agora, they answered with the Senate, to the Acropolis, with the Capitolium; to the theatre, the Co