on May 14, 2011
You can see this and more of his work in The Guardian
http://www.guardian.co.uk/artanddesign/gallery/2011/may/13/ira-cohen-photography-in-pictures 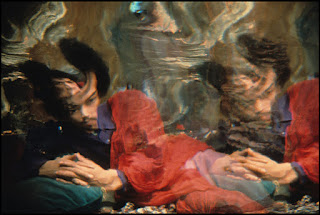 Here the obituary by The Guardian:


Ira Cohen, who has died of renal failure aged 76, participated in the 1960s artistic counterculture as a poet, publisher, film-maker and raconteur. In the middle of the decade, he took up photography seriously. At his loft in Jefferson Street, New York, Cohen built a chamber with walls and ceilings made from sheets of Mylar, a reflective polyester film. Inside this chamber, he took portraits of William Burroughs, Jimi Hendrix, Alejandro Jodorowsky and the steady stream of hipsters who visited the loft.
Rather than photograph his subjects directly, he took pictures of their distorted reflections on the chamber's walls and ceiling. The surrealistic and psychedelic results were described by Hendrix as "like looking through butterfly wings". The photographer and film-maker Gerard Malanga called the Mylar chamber "a kaleidoscope where the reflections being photographed constantly changed". Life magazine, in its final issue of the 1960s, praised how close Cohen's photographs came to "explaining the euphoric distortions of hallucinogenics".
Cohen was born to deaf parents, Lester and Faye, in the Bronx, New York. He learned sign language before he could read and write. He attended Horace Mann school and Cornell University, where he took writing classes from Vladimir Nabokov. At Columbia University, he became involved in the jazz and avant-garde scenes of New York's Lower East Side.
In 1961 he boarded a freighter to Morocco where he spent time with Burroughs and the writers Brion Gysin and Paul Bowles. He embarked on publishing a literary magazine, Gnaoua, centred on the Beat scene in Tangier. In 1964, the only volume of Gnaoua was published, with contributions including a preview of Burroughs's cut-up novel Nova Express, photographs by Jack Smith and Allen Ginsberg's reflections on totalitarianism. A copy of Gnaoua can be seen on the cover of Bob Dylan's album Bringing it All Back Home.