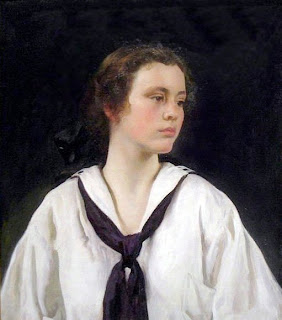 RH Ives Gammell - who has a group on Facebook - was a key figure of mid-twentieth century art. He learned from and associated with a number of the finest Boston painters in the early 1900s, and shares his experiences in his book, The Boston Painters (1900-1930). Today he introduces us to artist Joseph Rodefer DeCamp (1858-1923).

A Short Bio
Born in Cincinnati in 1858, Decamp began his art studies when he was fifteen, became one of the Duveneck Boys when twenty, and spent most of his life in Boston both as a teacher and as one of the finest portrait painters in the States. Interestingly, he was guided in that direction as the result of a fire which engulfed his studio.

"In desperate straits, the poor man walked into the St. Botolph Club lounge the next day, and announced that all his paintings had been destroyed. "I have a family to support," he told them. "I'll paint anybody's portrait for $100." Partly out of friendliness, several men took him up at once and were delighted with what they got in return. Soon the demand for DeCamp portraits was so great that they commanded the top current market price and their vogue never declined.First Encounter
Gammell had been sent to see DeCamp by his instructor William Sargeant Kendall. Kendall wanted his seventeen year old student to show his work to the man whom he considered to be the finest trained painter then residing this side of the Atlantic. Gammell still vividly recalls DeCamp's "Come in!" as he stood at the head of the stairway before descending to his studio.

What DeCamp Had to Say
"Momentous episodes of that caliber etch themselves indelibly in the minds of aspiring young painters and today, more than sixty years later, I can still picture DeCamp reaching into a portfolio for some photographs of paintings by Velasquez. First he selected the celebrated bodegone* representing an old woman cooking eggs, and pointed to the rigorous insistence with which each detail had been worked out. Then he took up the Rokeby Venus and said with a characteristic sweep of his long fingers across the broadly modelled forms, "But before he got through he made them like this." 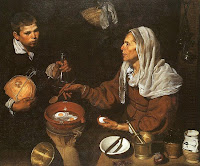 
(This is exactly what my teacher is trying to instill into my way of thinking, also using Velázquez as the example. 'Breadth of treatment' is the term he uses. Let the eye sweep over the forms - even letting it have the option of taking in the whole canvas instead of having to halt over and over again like a car on a street with too many stop signs. Try opening enlargements of the two paintings above side by side. See how your eye stops here - and here - and here, etc. in the beautifully drawn painting Old Woman Cooking Eggs - which is early Velázquez - then see how it easily it sweeps over The Toilet of Venus - which was done years later.)

Another piece of advice Gammell received from Joseph DeCamp had to do with his approach to painting - a methodology that depended on an artist's ability to draw well. DeCamp was one of the best draftsmen of his day, and even as a young man could draw quite correctly when he arrived in Munich to learn from Duveneck. He was better prepared than his classmates to assimilate his teacher's rare faculty for expressing form with paint. This is something very different from coloring a carefully established drawing and which presupposes a power of discernment not many painters ever attain. All his life DeCamp considered this essentially painterly quality to be a major asset of the painter's self-expression.

To illustrate this, as Gammell and Joseph DeCamp strolled together through the Louvre, DeCamp would pull up before a Hals, a Rembrandt, a Fragonard, a Gericault or some other master, major or minor, and expatiate on how the artist had 'made it out of paint.' Something that does not work well unless the artist has a mind concerned with drawing well as he paints. As Gammell expresses, 'Unless a painting's flourishes are underpinned by very strong draftsmanship, spirited brushwork slips into mere bravura which only emphasizes the vacuity of a second-rate painter's statement.'" 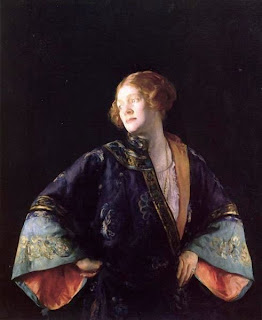 • In Spanish art, a bodegón is a still life painting depicting pantry items, such as victuals, game, and drink, often arranged on a simple stone slab, and also a painting with one or more figures, but significant still life elements, typically set in a kitchen or tavern.

• To see more of his work, click here• Quotes are from RH Ives Gammell's book, The Boston Painters (1900-1930)http://lacrank.blogspot.com/2011/04/ives-meets-joseph-rodefer-decamp.html?spref=fb
Seen and read