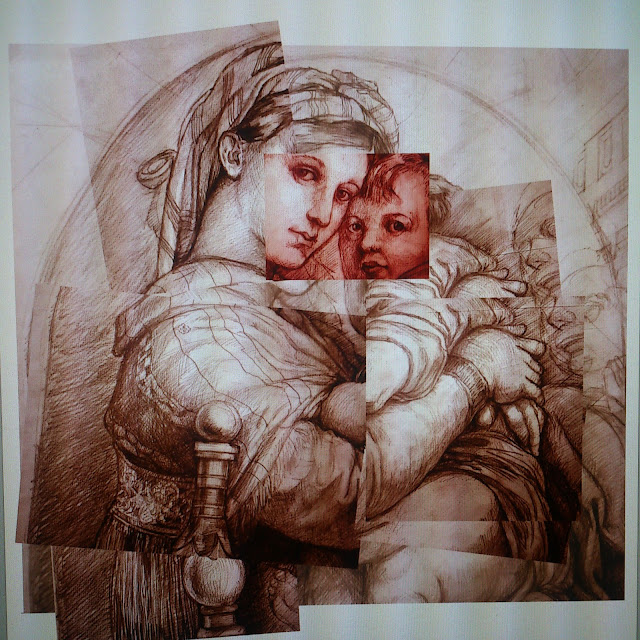 This is a painting, titled Madonna della Sedia-or Virgin of the Chair-, that I really don't know why it is not more famous, as I really like it, starting from the rythm of the circular composition, the finishing, it is a really accomplished point in Raphaels career. Because I really like it, I has made copies of it at different moments of my career, and every time I find it as fresh and illuminating as the first time. It hangs, covered by a polished and  reflective glass, hanging in the numerous lines of famous paintings placed one after another after anpther in the vast rooms of the Palazzo Pitti.
One of the characteristics of Raphael is his malleability in studying others artists and digesting their influences in a whole new "maniera". He did it with Perugino, making those delicate, soft, rounded-faced figures part of his own repertoire, later with Leonardo and those dynamic compositions of his, and was doing it with Michelangelo and his tormentous bodies when death cut him short. The process left a whole body of works in the hands of his disciples, who made of them what they could.
In this composition, I like how the rythm is marked  by the embracing arm, echoed by the curved back of the chair and the reclined hed, all part of complementary movements and rounding shapes. The original work is made in a tondo, a circular format in vogue in Renaissance Italy. I personally think few compositions of that time have such a success in fitting so naturally in such format.
____________________________________________________________
Notes:
Here the Wikipedia page of the painting:
https://en.wikipedia.org/wiki/Madonna_della_seggiola
drawing german fernandez my work painting