on March 26, 2018
This painting by Rubens have it all, specially in how he used his mastery fo color to convey an atmosphere and to define the shapes of the characters without submitting himself to a restraining palette or a rigid light scheme.The flowing nature of his brushwork however is firmly attached to a complete mastery of the principles of classical anatomy, chiaroscuro and perspective, product of his youth training in Italy. These scaffolding of knowledge is what usually separates his work from his followers, even the ones of his own workshop(the case of Van Dyck is an outlier in this regard). As usually happens, what was criticized more in Ruben's style, this exuberant and free flowing maniera, that supposedly lacked substance, is certain in the works of followers, imitators and copyst from his very own time, who are really numerous, as Rubens was the most popular painter of his time.
You can see those details in the original, from the tones he used to depict the skin of the faces, the volume of the clothes, as well as the sometimes subtle, sometimes vibrant scheme of lights and shadows across the bodies of the apostles and the angel in the middle of the composition. I really learned a lot!. I started copying the head of Saint John (around July 2017)  and his colourful cheeks in contrast to the pale skin, and then progressed to make the complete figure and the light coloured cloth.
For me, it is interesting to do all this in the Intuos Wacom I use for digital illustration. I try to use opacity at 100% in Photoshop so I can foccus on selecting the color instead of using variations in opacity, that will be more like a glazing process, but since my interest is to learn how to build light, shape and volume with color, I stuck to the most basic procedure. Copying was crucial to the learning process in the painter's workshop. But also, as part of a dialogue with the past. An interview. Why to put that color in that place? Why to make the eyes like that?, and then , as painting progresses, find the answers. I will post some of the copies I am doing as training. 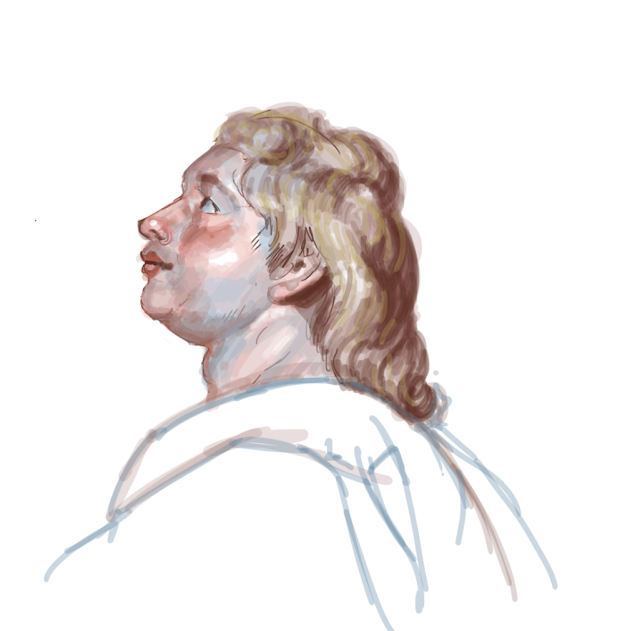 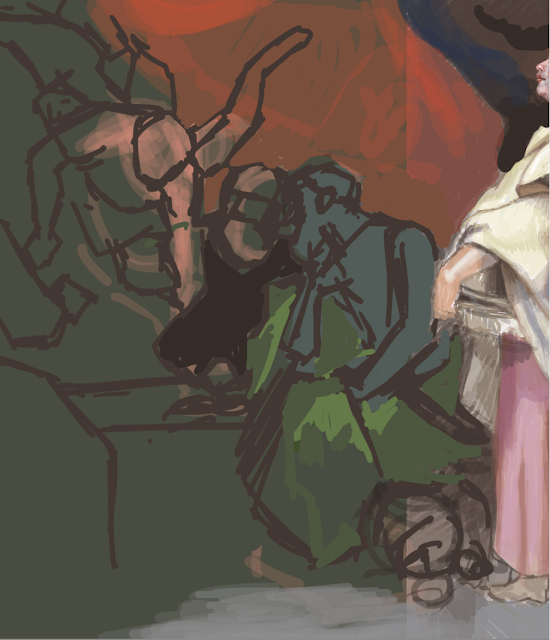 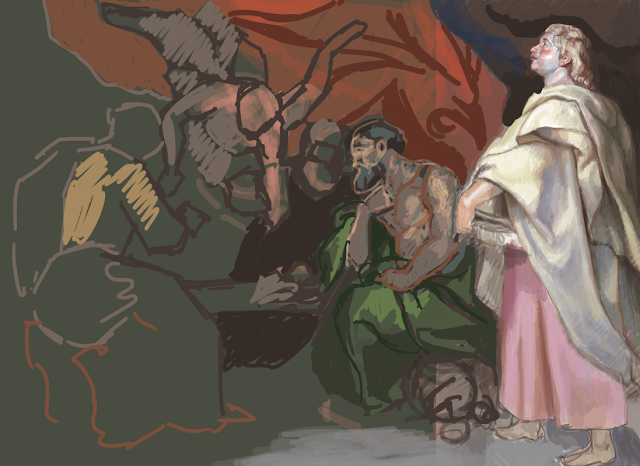 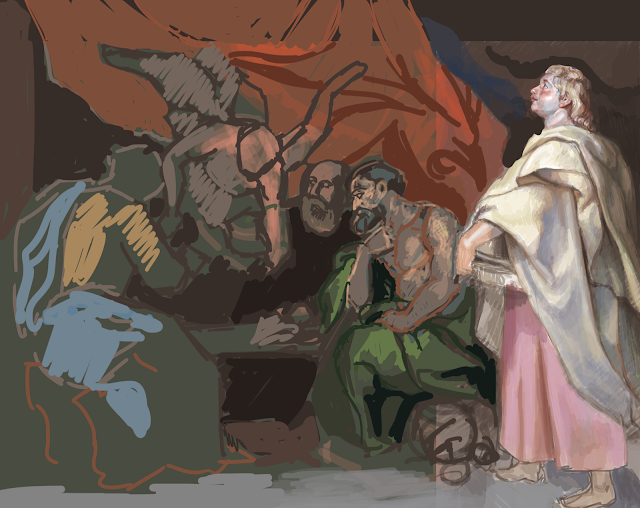 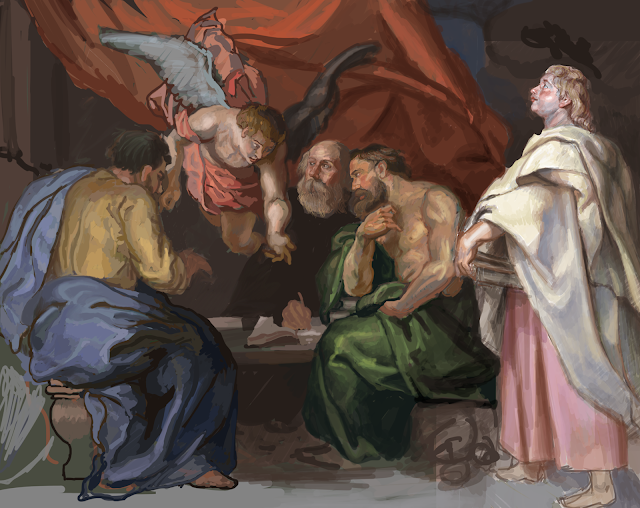 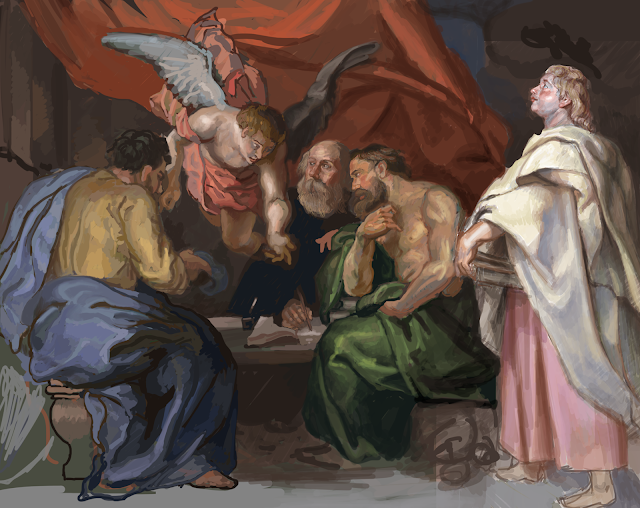 ___________________________________________________________________________________
Notes:
https://artsandculture.google.com/asset/die-vier-evangelisten-peter-paul-rubens/5QFP9IzulXrBdw?hl=en
"Peter Paul Rubens (1577-1640) shows the four evangelists Luke, Matthew, Mark and John at the moment of receiving divine inspiration that moves them to write the Gospels. They are grouped around a table and are shown with their traditional attributes: Luke with the bull, Matthew with the angel, Mark with the lion and John with the eagle. As witnesses of the life of Jesus, the evangelists occupy a central position in conveying Christian doctrine and were often depicted in art. In Dutch painting, Rubens' picture is one of the few paintings that shows all four evangelists together in one scene. Single-figure depictions of the individual evangelists are more common. The painting was created only a few years after Rubens' stay in Italy (1600-1608). There he made sketches based on works from antiquity and the Italian Renaissance, which influenced his later work. In the 17th and 18th centuries, works by the Flemish painter Peter Paul Rubens were among the most expensive paintings on the art market at the time, alongside those by the main masters of the Italian Renaissance. They were popular collector's items that were hardly missing from any significant princely art collection. Frederick II of Prussia also had numerous large-format works by the artist acquired for setting up the picture gallery, and in some cases paid top prices for them. When the picture gallery was first set up in 1764, a total of 38 paintings could be counted that were presented as works by Rubens. However, not all attributions withstood the later judgment. Over the centuries, many paintings have been attributed to Rubens' students or his workshop. Today seven paintings by Rubens are still shown in the picture gallery. The "Four Evangelists", which can be found in the picture gallery since 1763, were considered the work of Rubens' younger colleague Anton van Dyck until the end of the 19th century. (Alexandra Bauer)"
copy digital painting my work