on August 26, 2018
1
Caravaggio (1571-1610) is, among the Italian Old Masters, a painter renowned for the violent chiaroscuro of high contrasting scenes where a fragment of light reveals everything in the middle of a deep darkness  Because the light of Caravaggio is devoid of the subtleness. It is sharp and clear as could be to make the shadows more intimidating. Theatrical, yes, they are, but more of an avant-garde scene than of classical harmony, and that is why his art is so appealing to the contemporary eyes.
More proper of the Neapolitan baroque than of the Roman classicism, the paintings, could be said, speak of a tremor of human existence, a pathos. The believer who has visited a baroque church in the daylight of a sunny day can easily recognise such a setting. But also Caravaggio's paintings work because in the middle of that light setting, the artist built his characters wth strong volumes.And that mixture is what has attracted me to make some exercises using his works.
Even in his early work, the approach to light verges more to the sharpness than to the softness of the division between light and shadow, like in some scenes of the Bassano (1510-1592), Domenichino (1581-1641) and Carracci(1560-1609).  But if Rubens (1577-1640) and Bernini (1598-1680) will later take on the exuberance of the sentiment to the form and to the color, Caravaggio restricts himself to potentiate the drama of the light. Only Zurbaran, and the early Veasquez- in his Sevilla period-will caught such spirit.
2
I remember from the old days at the university, when I saw the students in the third, fourth and fifth year of the speciality of painting, doing their preparatory drawings in a kraft paper with bistro or charcoal, and besides, in just a small piece of paper, canvas or wood, a simplified version of the painting, reduced to rectangles following somehow the light scheme of the object, model, still life, landscape they were depicting at the moment.
This was the palette.
From there, they will take guide when preparing the final piece. The rationale behind this was that the light should be felt by the relationship between colors. I remember learning a lot from people like Jorge Caparó and Luis Najera. But they are just the first that come today to my mind. I learn a lot from many of the artist growing there. Everyone has some aspect from which I could learn.
3
This is an attempt to doing the same but digitally. And here I processed two versions, one with more rectangles, and the other with les. Rectangles or squares, is the same, the point is to try to define the color areas independently of the shape and the softness (or hardness) of the lightning.
In the end, the result is something that remind me that I always loved Paul Klee and I always loved Caravaggio. So it was natural to mix both. I always liked the idea of how Paul Klee created emotions and flows just with squares. As such, his works were learning paths to develop compositional schemes.
Here I experiment simplfying a Caravaggio painting, to see what kind of composition or color tonal scheme I would get.
And in the  picture 4  shown here, we can see narrative storytelling at its best in painting. Compositional nous could be hard to come by if you are not an experience photographer nowadays. Rythms, gestures and correspondence between actors sharing a space are the daily bread of photographer around the world. In this painting, Caravaggio show us his abilities as storyteller, joining twelve action in a somehow reduced space.
4
And in the  picture 5 (denial...) shown here, I took some images from the web to practice about how I could enlighten a painting which has a sidelight illumination and a dark background, to get a sensation of an open place. Well, there is more much to practice but is interesting to see how it works out in a tenebrist scene in a work of Caravaggio. These are just little visual games that you can do to learn how much do you understand light and what stilly ou need to learn. As we can see here, my rendering was quite unveritable and not really convincing, but nevertheless it helped me in finishing the painting I was doing at the time. I think so. 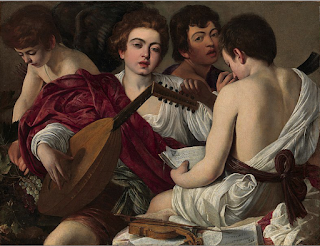 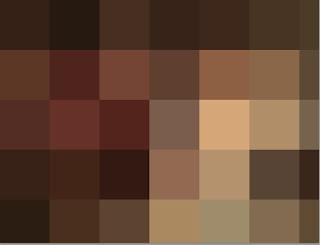 2. Judith and Holofernes (circa 1600), by Caravaggio. Above: Original painting Below: Simplified color analysis. 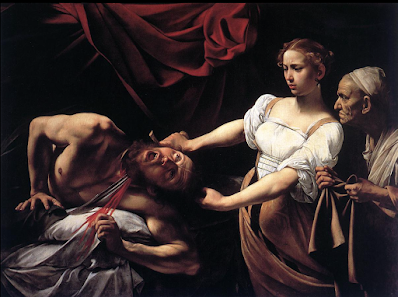 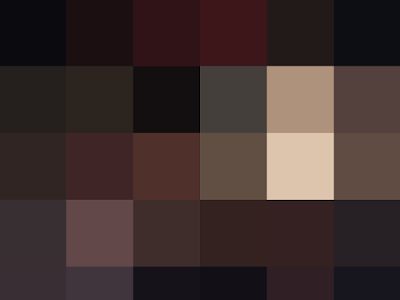 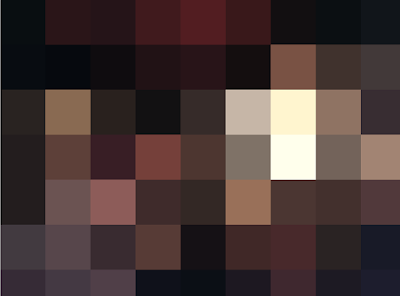 3.The Call of Saint Matthew (1599-1600), by Caravaggio. Above: Original painting Below: Simplified color analysis. 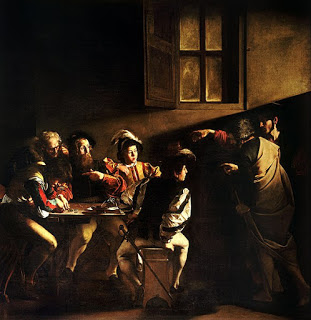 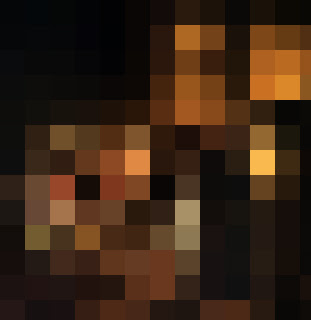 4. Seven works of mercy (1607), by Caravaggio. Above: Original painting. Below: Synthesis analysis. 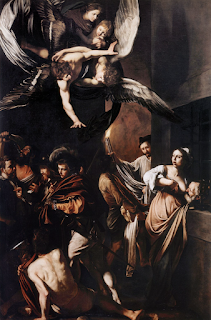 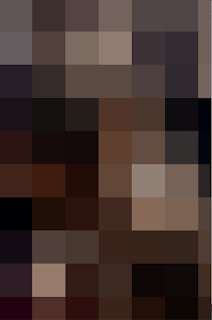 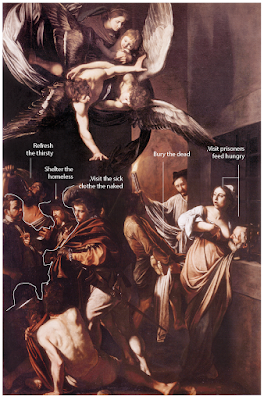 5. The denial of Peter (1610), by Caravaggio. Above: Original painting. Below: Alteration exercises. 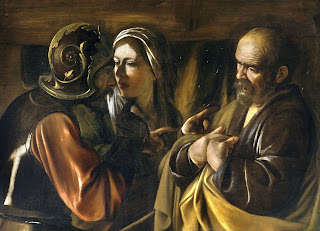 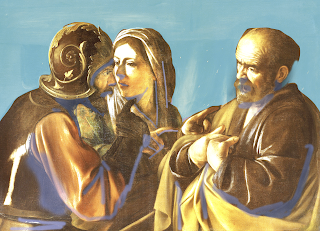 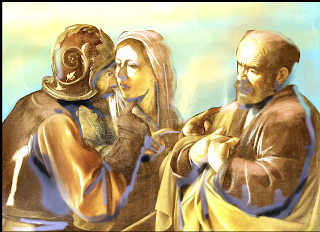 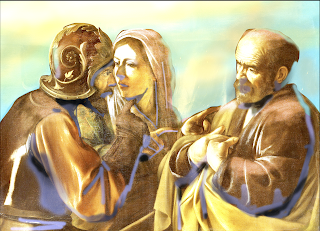 Notes:
____________________________________________
According to Wikipedia:
https://en.wikipedia.org/wiki/The_Denial_of_Saint_Peter_(Caravaggio)
The Seven Works of Mercy (Italian: Sette opere di Misericordia), also known as The Seven Acts of Mercy, is an oil painting by Italian painter Caravaggio, circa 1607. The painting depicts the seven corporal works of mercy in traditional Catholic belief, which are a set of compassionate acts concerning the material needs of others.

The painting was made for, and is still housed in, the church of Pio Monte della Misericordia in Naples. Originally, it was meant to be seven separate panels around the church; however, Caravaggio combined all seven works of mercy in one composition which became the church's altarpiece. The painting is better seen from il "coreto" (little choir) in the first floor.
____________________________________________
Caravaggio’s ‘Seven Works of Mercy’ in Naples.
The relevance of art history to cultural journalism
Ralf van Bühren
" Their literary origin is the biblical pericope (Matthew 25:31–46), where Jesus Christ sets out six works as precepts for the Last Judgment: (...) The huge and complex painting is still in its original location, where it was commissioned by the ‘Confraternità del Pio Monte della Misericordia’ in 1606/07 as a canvas painting for the reredos behind the main altar of their church (...) In 1658, the confraternity commissioned Francesco Antonio Picchiatti to build a larger church on an octagonal plan, where Caravaggio’s painting is still above the main altar..."
"... it might be possible to recognize in the baldachin-like form of the outspread wings a reference to the iconographic tradition of the ‘Madonna della Misericordia’ (‘Virgin of Mercy’), a devotional image especially popular among charitable institutions in Italy during the Middle Ages(...). In Caravaggio’s painting, the wings of the angels take the place of the cloak, which the iconography of the Virgin of Mercy usually represents spread out over the sheltered supplicants. This is why the drapery of Mary’s cloak is ostentatiously hanging downwards..."
Caravaggio was renewing an old tradition in iconography. Just as in the conventional medieval manner, Christ arrives with his angels to observe the works of mercy. Caravaggio, however, presents Jesus not in his eschatological role as the Judge of the world (...) but as a – quasi smiling – infant with his mother in calm contentment. That was new. From the 12th to the 16th centuries, almost all representations of the works of mercy included the Last Judgment,(...)
In his painting, Caravaggio included Mary and Child as an afterthought, presumably at the request of his patrons. (...) radiographs taken in 1969 reveal that Caravaggio originally planned to include three angels in the upper section. During the second or third stage, he replaced one of the angels by the Infant Jesus and added Mary, resulting in the picture we see today..."
As seen in :
Journal Church, Communication and Culture, Volume 2, 2017 - Issue 1,(Pages 63-87 | Received 04 Jan 2017, Accepted 17 Jan 2017, Published online: 13 Apr 2017)
https://www.tandfonline.com/doi/full/10.1080/23753234.2017.1287283