on August 28, 2018
Closer to Van Eyck project (website)
I have seen Flemish School works before, but when I saw Jan Van Eyck's works in a Bruges museum, only then I grasped the reach of the possibilities of realistic observation and the  technique of oil painting.  The chained pieces of the armor, the luxurious shine of an ecclesiastical robe, the reflected face barely disguised in the golden shimmer of an angelical shield, the dedicated labour of painting layer after layer, stroke after stroke, a work only deserved to be acquired by kings and rulers.
A knack for finesse, detail, observation, texture, are the qualities that come to the forefront in Van Eyck's work.  But, above all, in my opinion, delicacy of brushwork.
The delicate jewels depicted strenuously in maximum detail were made as a tour de force buit they are also a emblem of the kind of spirit of the whole work, minutely detailed, like savouring the existence in this world in a sober, cold , scientific manner if that is possible at all, the kind of information a just opened eye could gather, thirsty to catch all the information available, as art was waking up to the perspectives of a reloaded figurativism. See this, touch that, contemplate everything in this mirror of the world, marvel at the brief moment of life you have to take a glance to all things, wordly and unwordly, nature at flow, nature in detail, all wholesome theater in the great scheme of things. Some of the seeds of the baroque are, dormant, but still there.
Stroke over stroke, brushing the softened white table, ready to be oiled slowly and glowingly with earths of different colors, brought form afar, by traders of  all avenues of life, by sea and by land, from beyound the Aral, or mountains not to be named, using maps not to be shared. Like that other craddle of lurid colorism, Venice, Flandes, with cities such as Brugues and Ghent, was a meeting point for traders all over Europe, and as such has access to the most sough-after colours and influences of materials, ready to be melted by the alchemy of artisans of many crafts.  Slowly, they emerged from the pages of the Breviaries to the altars of the churches, to barely turn back.
All this is digitally observable now with this project.
The pieces have been analyzed, x-rayed, photographed as images and as objects, located and tracked, as is customary in the paradigm of the digital humanities nowadays.
Much has been said and written about Van Eyck, but for the learning artist, each work has innumerable layers of meaning and details to delve on. In the notes you can get  a look to just some of the observations made  in the historical trayectory of this body of works.
(http://closertovaneyck.kikirpa.be/ghentaltarpiece/#home/sub=project&goto=SEC05) 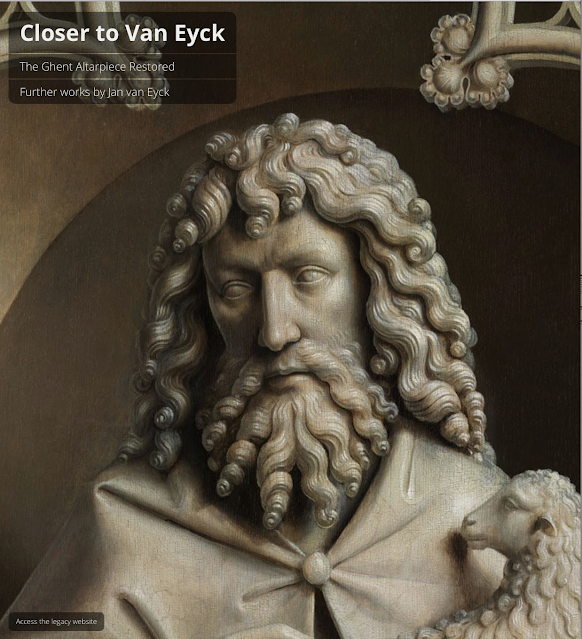 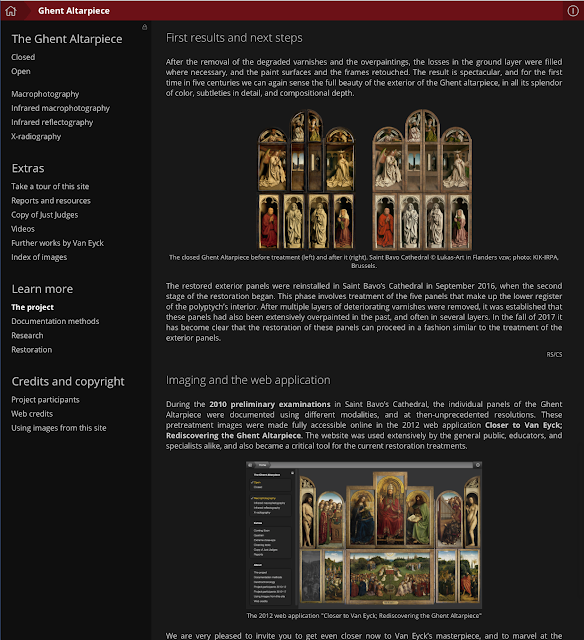 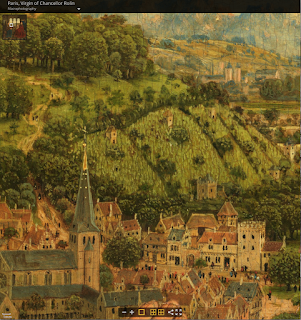 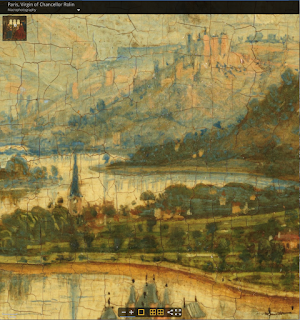 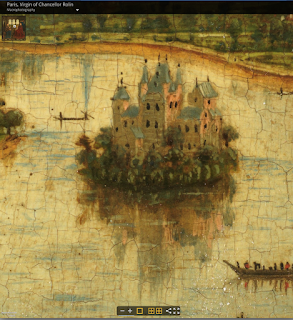 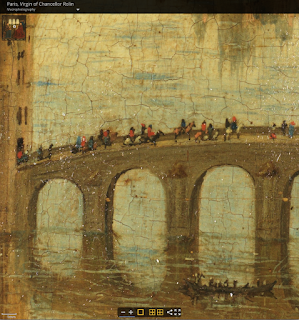 Little is known of van Eyck's origins, but he probably came from Maaseik, near Maastricht, and was of the gentry class. He is first heard of in 1422 working in The Hague for John of Bavaria, ruler of Holland. From 1425 he was at Bruges and Lille as painter to Philip the Good, Duke of Burgundy. In 1428 van Eyck was sent to Portugal to paint Philip the Good's future wife, Isabella of Portugal.

Van Eyck appears to have painted many religious commissions and portraits of Burgundian courtiers, local nobles, churchmen and merchants. A small group of his paintings survive with dates from 1432 onwards. One of his most famous works is the 'Arnolfini Portrait', signed and dated 1434. It is thought that his 'Portrait of a Man' may be a self portrait. "
(National Gallery)


https://www.metmuseum.org/toah/hd/eyck/hd_eyck.htm
"Jan van Eyck is the most famous member of a family of painters traditionally believed to have originated from the town of Maaseik, in the diocese of Liège. The work of the Van Eycks, epitomized in the Ghent Altarpiece , brought an unprecedented realism to the themes and figures of
late medieval art . Van Eyck pursued a career at two courts, working for John of Bavaria, count of Hainaut-Holland (1422–24), and then securing a prestigious appointment with Philip the Good, duke of Burgundy (1425–41). Employment at court secured him a high social standing unusual for a painter, as well as artistic independence from the painters’ guild of Bruges, where he had settled by 1431. Evidence that the Van Eycks bore a coat-of-arms, and thus belonged to the gentry, and that Jan was literate (as shown by his own handwriting on a drawing), is consistent with the probability that some of his frequent travels for the duke were diplomatic missions. Many aspects of his work were surely intended to promote his personal reputation and abilities, including his practice of signing and dating his pictures (then unusual), and his playful and quasi-erudite use of Greek transliteration in his personal motto Als ich kan (As well as I can). His artistic prestige rests partly on his unrivaled skill in pictorial illusionism. The landscape of his Crucifixion (33.92ab ), with its rocky, cracked earth, fleeting cloud formations, and endless diminution of detail toward the blue horizon, reveals his systematic and discriminating study of the natural world. Van Eyck’s ability to manipulate the properties of the oil medium played a crucial role in the realization of such effects. From the fifteenth century onward, commentators have expressed their awe and astonishment at his ability to mimic reality and, in particular, to re-create the effects of light on different surfaces, from dull reflections on opaque surfaces to luminous, shifting highlights on metal or glass. Such effects abound in the Virgin of Canon van der Paele (1434–36), as shown by the glinting gold thread of the brocaded cope of Saint Donatian, the glow of rounded pearls and dazzle of faceted jewels in the costumes of the holy figures, or the small, distorted reflections of the figures of the Virgin and Child repeated in each curve of the polished helmet of Saint George. The almost clinical detail in the face of the kneeling patron vividly illustrates Van Eyck’s acute objectivity as a portraitist. Through his understanding of the effects of light and rigorous scrutiny of detail, Van Eyck is able to construct a convincingly unified and logical pictorial world, suffusing the absolute stillness of the scene with scintillating energy. Despite this legendary objectivity, Van Eyck’s paintings are perhaps most remarkable for their pure fictions. He frequently aimed to deceive the eye and amaze the viewer with his sheer artistry: inscriptions in his work simulate carved or applied lettering; grisaille statuettes imitate real sculpture; painted mirrors reflect unseen, imaginary events occurring outside the picture space. In The Arnolfini Portrait, the convex mirror on the rear wall reflects two tiny figures entering the room, one of them probably Van Eyck himself, as suggested by his prominent signature above, which reads “Jan van Eyck has been here. 1434.” By indicating that these figures occupy the viewer’s space, the optical device of the mirror creates an ingenious fiction that implies continuity between the pictorial and the real worlds, involves the viewer directly in the picture’s construction and meaning, and, significantly, places the artist himself in a central, if relatively discrete, role. Another reflected self-portrait, this time in the shield of Saint George in the Virgin of Canon van der Paele, functions as part of Van Eyck’s textural realism but likewise challenges our credulity by reminding us, through this minor intrusion of the artist’s image, that his ostensible realism is an artifice.
Despite his individual fame, Van Eyck’s achievement was not carried out in isolation: as was customary, he employed workshop assistants, who made exact copies, variations and pastiches of his completed paintings. Such works no doubt helped to supply a vigorous demand for his work on the open market, while contributing to the recognition of his name throughout Europe. After Jan’s death in June 1441, his brother Lambert, who was also a painter, helped to settle his estate, and perhaps oversaw the closing of his workshop in Bruges."
(Metropolitan Museum)