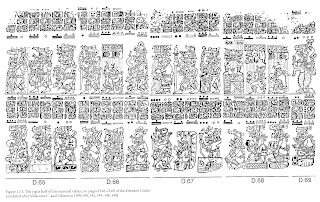 Data is the mantra of our days; everything has a data dimension to it. Data is every bit of information we can get about, well, anything. And that is a monstrous amount. Just as, Borges- who else-foresaw in his Funes el Memorioso tale, the story of a man who can remember every detail from every moment of his life. But more. But also it is true of reality that we need data, and data need to be worked with. Data need to be communicated, and in an easy way, among us, the humans. Our capacity is, however, reduced, and the channels used to convey information have to be adapted. How can this be done?
Through our senses, which  in stark contrast to this new data dimension of our lives, had been with us, literally, forever. The main way through which we have communicated the unfathomable dimensions of our lives has been the way of the arts; dance, music, storytelling, images. And all of them have made use of one, simple, powerful device: the symbol.
Data is usually associated with a cold thinking approach as opposed to emotions. A sea of algebraic thinking walled one after another, parsing complex operations of straining algorithmic effort in an ever more expanding way. And while this is true, usually what we call emotion is mainly a group of data we do not know well or at all (from personal knowledge, domain know-how, etc.) or that is condensed trough experience but not systematised, accessed only through our gut feeling or our intuition, in a way faster than through rational methods.
However as more and more data is gathered nowadays, the barriers are, paradoxically, dissolving. Through mixing of demographics and psychographics, more information is accessible to sustain or challenge previous assumptions of society and culture, accessing areas of knowledge not familiarly related to data analytics; some things become clear, some others not; as layers of layers of these analysis and conclusions sediment one after another, our mind tend to simplify them under the cloudy image of Big Data. Data so big that it is difficult to apprehend. Unless symbolically. Because our perception simplify this complexity but while doing so, is not disappearing the power of its content, but transforming it.
The symbol, which built on relatively simple structures that speak to our senses, communicates a lot of meaning obtained, of course, by generations and generations of accumulated experience, -if you will- of data. Data and symbol are therefore, two extremes of the same path; many times to go and come back between the two is difficult, but by being connected, both of them enrich exponentially: the data gets a powerful channel trough were it can communicate its complexity, and the symbol gets a more tangible, feet-on-ground substance to its expressive power.
But, hey, of course, the numbers are symbols, don't they?. Yes, but no. We are not talking about that type of symbols. Or do we? We could say that numbers are the first symbolic element in the data, which progress in the opposite direction, to words, to codes, to songs, books, emblems, temples and so on.
The advance in technology brings a new set of interactions that will have to rely more and more on the arts as the arts have a deposit of knowledge about perception interactions. It is true also that the complexity of data and technological advances in technologies such as aural technology, VR or MR, impulse us to take a look to disciplines that were relegated before, like dance, theatre, oral literature.
While the idea of the totemic data is something plausible, the way in which this will be achieved have questions of their own, posing very curious scenarios. Because then there is AI. Nowadays a ever expanding field, including the subdivisions of machine learning and deep learning, is the main vehicle to work with data. If artists are image makers, and by extension symbol makers, and if AI machines are replacing humans in every field and since AI machines are the ones dealing with the vast amount of data we live with, will they be the symbol-makers of the future? Symbols with a deep density of data, processed to make meaning of such density through the perceptual structure of the symbol.
The answer for those questions will be still talking about data-symbols made for our perception, for our senses, suitable to us. Since we started this text referencing Borges, it is right, for this very same reason, to ask, what if we stretch a little more our questions? Our reasoning up to here has been made on things we already more or less know, making assumptions we can envisage. probably when AI arrives at making art, past through the necessary stage of mimesis, it won't be something we understand and probably won't even have that name.
After all, what is art? And based on that definition, what a Generative Adversarial Network, to name a thing, for example, will call art? For sure not a painting, nor a sculpture, not a song, if it is not to betray its very essence. Probably since there are parts of a machine though we cannot understand, probably their art will be incomprehensible to us. Will be strange artful blips in the night or playful lines of unintelligible philosophical code? Will be a performance not destined to us, will it be a humongous perpetual metadata query to be shared only among systems of meta-systems, an incomprehensible flow of algorithms undetectable to us? Que sera, sera? What, art, in the era of AI and Deep learning, will be?