Here some pics of the painting I made for a very special client. It depicts a conversation between Sheikh Zayed bin Sultan Al Nahyan (1918-2004) and Sheikh Rashid bin Saeed Al Maktoum (1912-1990), who were rulers of Abu Dhabi (since 1966) and Dubai (since 1958) respectively and two of the founding fathers of the United Arab Emirates. The country was founded in 1971 and will celebrate its 50th anniversary in 2021. Sheikh Zayed and Sheikh Rashid were the driving forces behind the unification of the previously called Trucial Emirates (Abu Dhabi, Dubai, Sharjah, Ajman, Ras Al Khaimah Umm Al Quwain and Fujairah).
The picture above is the final stage, while the pics below show different stages of the painting, from the underpainting in black and white to the posterior development in colour, and some reworking in the faces. While developed in two separate canvas, the composition is developed to work as a whole. The size of each canvas is approximately 1.80 m by 1.20 m.
I came with the idea after making the illustrations for a book on the life of Sheikh Zayed. After the project was finished, I felt I still can explore a little more on the development of some of the compositions such as the one I did about the interview Sheikh Zayed and Sheikh Rashid had in the desert about committing to the union of their sheikdoms, at the moment two separate entities under British protectorate. The compositions were, two-person Emirati attire, seated and talking. I developed the figures as reclined both over their right leg, so they will look like a variation over a fairly symmetrical pose, while the hands will repeat loosely this approach while allowing to draw the clothes with different shapes. While initially I was thinking to place a tent in the background, at the end I decided to do an open sky.
The first linear drawing, with bold brushstrokes, was to define the position of the main structures (the head, the hands, the leg). Over that, I made some changes about proportion and shape, before starting the blocking or the underpainting, all in grey. Although the client like it this way, I wanted to work more on colour, just for the sake of it, as it was a long time I didn't approach a painting of this size.
What I like about painting in acrylic is that somehow you can see what you are doing more quickly. Certainly, it doesn't allow the chromatic games the slow rhythm of oil allows you, but I think that is a fair compromise, especially if you have to paint during your free time. 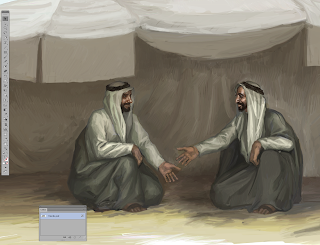 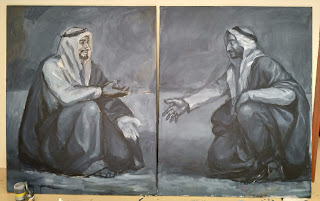 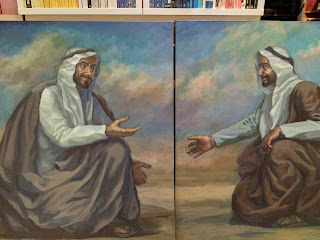 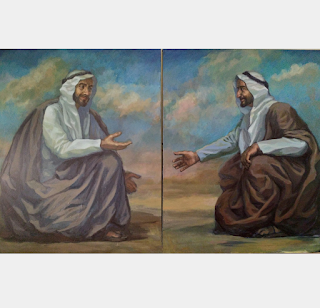 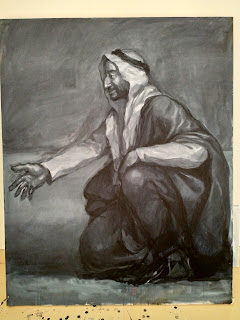 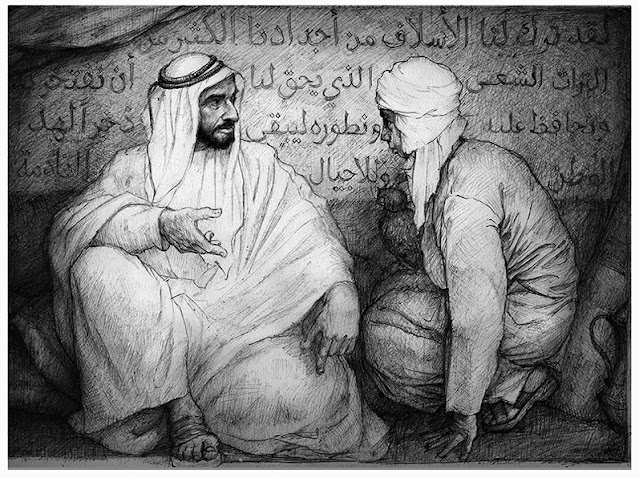