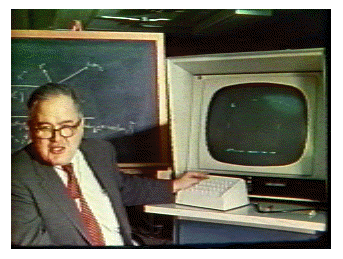 Uncertainty. What a word. You know what that word means, which is the eerie feeling of not knowing. But not ignoring something irrelevant, but most probably that you ignore; is it maybe concretely something you should or must know in your current circumstance? or even better, something you probably could know but you are not so sure.
With the new situation around the globe (early 2020), not only the world was under stress. Science as well. It was not its duty to make "scientific", infallible decision and solutions?. Chaos ensued, and the trial and error method of the science was taken instead as a succession of failures by the more extreme sectors. Laboratories around the world scrambled to make the vaccines faster than ever before, but the many in the public took this as incapacity.
There was an urgency to understand, and the relevance, nature and understandings of the statistics as a tool arrived daily to the general public, being as prominent among the social media tweet as the scenes of emergency rooms across the world. Under the shadow of Jon Snow and Florence Nightingale, statisticians try to make sense of the reigning chaos. either in the rate of spreading, in the number of fatalities or the correlation between, growth, population and deaths.
Statistics are a hard sell for the non-initiated, among who I count myself. The numerical nature of the statistics, based in the world of maths (is that the correct term?) brings us to the question: are maths invented or are they discoveries? is a question that specialists ask themselves, but one they answer with an argument that puzzles me as an artist, non-number type of person.
Maths, are another way, incredibly accurate, to describe and depict the world in a knowledgeable way. As is, in some other way, a watercolour, a novel, a poem, a song. I guess. Numbers, abstract and mental, and colour, sensual and perceptual, however, cross paths in the unlikely world of data visualization. Having been trained in visual graphics, I could appreciate the effort made to compress meaning into these geometrical shapes. The same encoding that makes the charts and graphs so hermetic to the laypeople like me, who just recently could appreciate the difference between the logarithmic and linear scale in the confection of a graphic. There is a method to the madness, somebody would say, and it is in the interpretation of this method where the magic process of decoding and interpretation happens.
John Tukey (1915-2000) was an American statistician who, among other things proposed an improved version of the boxplot (box and whiskers) for the visual analysis of the characteristics of a dataset (highest/lowest value, outliers, median, etc) in his book Exploratory Data Analysis (1977).
It was the year Elvis died. It was not yet the 80s, and still, there were only black and white, cathodic, dial-controlled TV sets in most of the world, forty-four years ago, and the computer revolutions were making great steps, which could pale to the experiences everyone has today with application software of complex sophistication and specialization, but those steps were the path for what came after.
In the available PDFs of Tukeys original works available on the internet, there is a rough aspect of the pre-internet typography and photocopy of the pdf I found that I like. They show the work of a person, who like everyone else, manage a certain degree of uncertainty in his life.
Besides this, there is much more to the work of Tukey, like I discover when seeing his video demo showing the PRIM-9, a data processor of sorts that prefigurated the Tableau of our days.
Because sometimes the greatest thing you can admire in most sciences is this Promethean effort to grapple with the world, many times obscures by intradisciplinary jargon and references.
All in all, as somebody said, statistics are just one way more to deal with uncertainty, so prevalent among us these days. Uncertainty could be a densely foggy day or a night of infinite darkness.
__________________________________________________________________________________
Notes:
In the video  which I will link below, you can see how Tukey manage and manipulate a set of data-points in the monochrome screen, which you can see here: http://stat-graphics.org/movies/prim9.html,
And this was in the seventies!. And I also didn't know that Tukey and Ascombe were related trough the family of their wives! But that is subject for another post.
Here are some screenshots form the charts John Tukey used in a serie of talks about the work developed 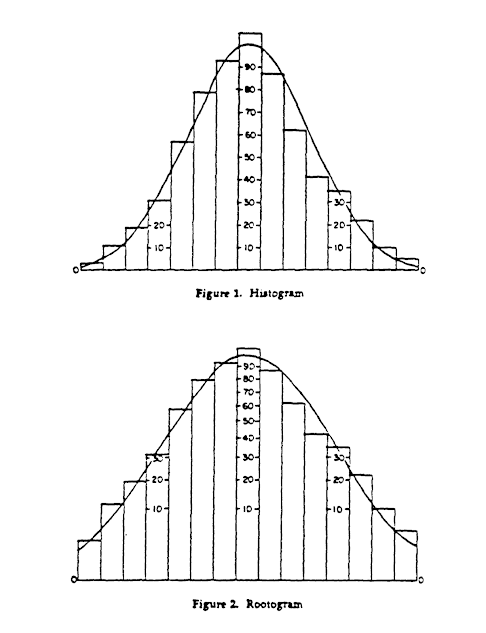 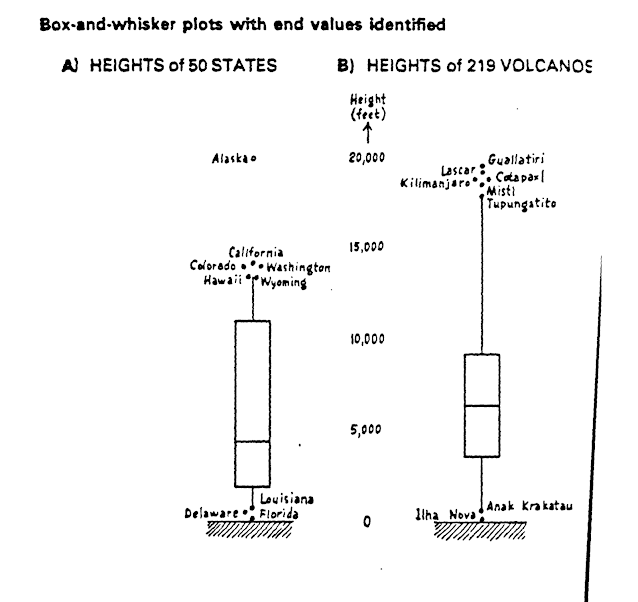 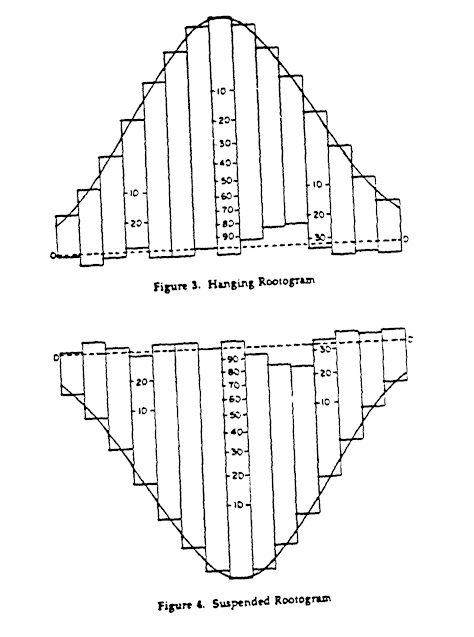 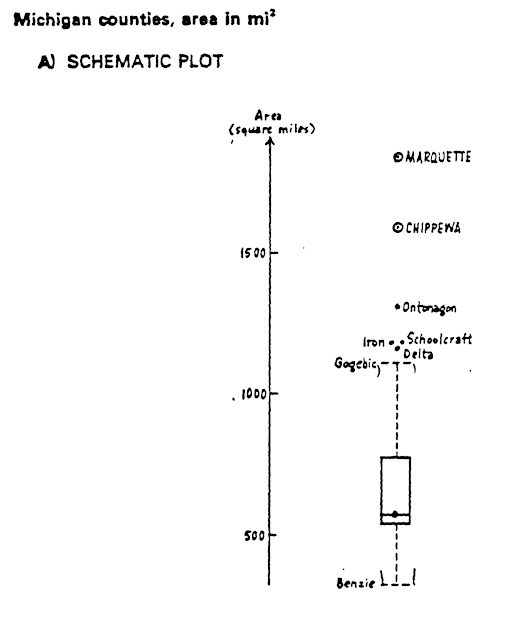