Provisional Dictionary of Interpretations for the collection of works of the procession of the cemetery, called “The World”- Preface

We are glad to present you this dossier, printed in elegant format with the higher qualities in image reproduction for the faithful appreciation f the qualities of every artwork being calibrated by an state-of-the-art AI algorithm carefully crafted by the specialist ath the recomposition unit of our library(1). The collection that is the topic of this exhibition takes its name from an inscription in one of
the main pieces, which shows an inscription that says: “Procesion from the metropolis to the
necropolis, and back again, in the city, which is the world”(2).
These types of events were accompanied by literary and musical pieces. Guided by the information
depicted in one of the pieces, we know the name of the composition accompanying this one, titled “
Simphony of the Red Bird”: composed of three main movements, “andante, “ allegro” and
presto, with indications on which key to be played, Mi major and Mi minor, according to
the suitability of the interpreters ( and their instruments). 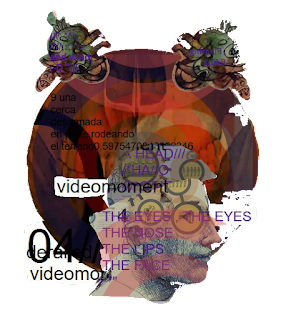 The notation can e distinguished a little effort form the part of the viewer. (3) The piece is by now lost, so we just can imagine how it was by fragmented, and in this creative effort we have been supported by the informed guess of our specialists, supported by the latest technology, an action that has allow us to get our hands on information recoiled here and there. According to our team, the structure of the piece is at some moments ressembling one of a fuga , sometimes a contrafuga, and sometimes the theme and the motive are not clearly defined, which betrays an origin of a not renowned second-tier author(4), relying in some well known, stereotyped formulas and tricks of the usual craftmanship of the time. 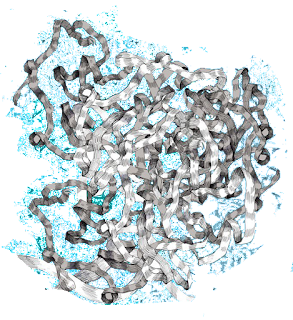 In regard to the painitngs and drawings, they are probably the product of a workshop, something corroborated in the uneven results that shows the use of hands of very diverse skill (5), since its discovery in a soon-to-be-demolished villa, part of the private collection of a wealthy misanthropic owner, the group of pieces has had a diverse fortune, some pieces has been lost, other abandoned to the harshness of the urban development or teared in pieces for domestic use, without much care of the elements/or content; some even where repainted by other artistswith unreguated materials in the times of the Greater Depression (6).

Some of the missed pieces were later reconstructed based on references found by few researchers,
if that name can be applied to these recollectors of information of the clandestine and the
forgotten, and some by the imagination of some sparse but enthusiastic fans, that, as writers
that, with more passion than craft, take a romantic approach to the story of the discovery of
these works. The works can be broadly divided by the type of technique in which they were made: drawings, paintings and a group of work that makes use of different media, from collage to clay.

The initial description of the collection goes as follows: nine canvases of middle size (between
1 and 1.5 width, almost squared) painted with acrylic on primed linen.
For the explanation of the content of these works, there are two hypothesis taken by the specialists.
Every entry of this dictionary has different interpretations that mainly can be reduced to three
choices by the reader.

First, we start with the mere description of the subject the entry is about. We talk about its
relation with other entries. 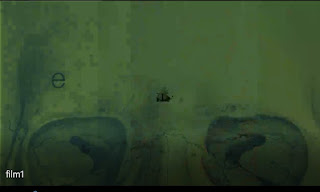 Signature (illegible)
(Scrabbled title)
________________________________________________________________________________
Notes
(1) Our team developed this proprietary code in a record time; they however stand on the shoulders of giants, generations of coders working through decades, an accumulative knowledge in their hands and the lines written. Technology can be so transient, always developing, leaving previous versions obsolete in a perpetual change. Our screens are the-allegedly-silent witness of all these alluvial developments, day in, day out, mixed with  mountains of  unstructured data and  a mare magnum of 0s and 1s. You see, this is at the end a binary world. Believe it or not.
(2) We were thinking to use this for the title of the general exhibition, however, practical reasons forced us to avoid this choice; the panels were to narrow and the time to commission a new one for this exhibition was narrow as well, so we change it to the one you see at the entrance.
(3)When we saw the pieces we didi ti in a dim light environment, nevertheless we can see it clearly. The place was an old hangar, of sepia tones and brownish atmosphere. it was a cold day in the morning, and the tones of cold, almost blue light pervaded the whole space.Among some specialists, version with keynote of Fa has been suggested.
(4) Who is to say? these kind of categorizations are so subjective! Although, it must be admitted , there are certsrin parameters to which every piece must be reckoned with.
(5) This is not unusual at all, considering the short deadlines.
(6)Do not confuse with the Great Depression of 1929.