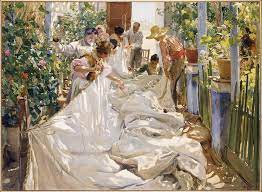 Being Spaniard and being a figurative painter in the shadow of Velasquez is hard enough, Goya
knows it; being a Spaniard painter and living in the same timeframe as the Impressionists, neo-Impressionists and emergent Cubists gives you, might be harder as it gives you, at the eyes of critics, another shadow to run away from. And if it also happens that you were successful in the circles that are now vanquished from the spotlight of the history of art, then you will find it hard to be cherished among certain circles.


Certainly, academic painting at the end of the 19th century was a highly developed system on the verge of implosion. Here comes in handy the notion of complexity (1). Developed to entertain a world where bucolic havens were the arcadian refuge of the elevated mind, of heroes and myths, it found it somehow hard to suit itself to the steel and steam reality growing in front of the eyes. Academic nudes can only go so far when people start dressing in suits and overalls, taking trains and working in factories starred with electric bulbs. While the advent of photography was seen as a challenge to figurative painting, it can be argued that it also helped to see the new reality with new eyes. You probably have seen some awkward painting depicting a modern situation where it is obvious the artist couldn't imagine suitably the scene he was depicting, struggling to show the citizens of the new age with the same power heroes of the past were depicted. You feel they can’t just play it to the right note.


Photography has been hailed as the true art of the 20th century(2); if you will, a title probably disputed by film, of which photography forms a basic part, l. An expressive tool that was suited to the faster pace of industrialised societies, still catching the human factor of the equation, from portraits to street art to abstract plays of light and shadow. And to all that, we can add a side effect from its practice; giving new eyes to figurative painters and visual craters in general. It turns out, all these practitioners play with the same elements of colour, light and shape, just with different tools. Illustrators and painters that live their everyday lives surrounded by the internet are flooded by figurative images-created by others artists, must be said- that have been refining their sophistication in terms of composition, lighting etc, passing on to our days the knowledge of before. Sure, and suitably to these days, we live in a multipolar world, where there is more to art than the old dichotomy of abstract vs figurative. Nowadays, figurative painters are one more element of the landscape, and as such, they feed on diverse sources, among them a refreshed vocabulary, brought to actuality by other media(3). No little part in this is due to the work of academics, who with a fresh eye interpreted images that before were dismissed as too pedestrian or not “high art”(4).


To be a painter is to learn to see in real life, construction of space colour and light, to learn perspective (5) and chiaroscuro. Plus the optics effects of the camera obscura and later, the photography. The blurred effects of a moving object. The gallop of a horse. Sorolla was not alien to this since, crucially, he practised as a photographic assistant in his youth, and while he does not, arguably, go to the length other artists go in assimilating the vocabulary of the new media in his works, nevertheless the photographic experience lurks beneath the layers of heavy pigment. Certainly, you can argue, as his critics do, that there is not an edgy or iconoclastic statement in his works, nor a tortured or conflictive life. In Sorolla, there is a joy of life, and above all, the joy of painting. The dashing palette, the bold work of movement with the brush, but above all the light. How to paint the light is the space where Sorolla uses his knowledge of the new imagery of optics and his academic knowledge of painting.


Brushwork, even when learned, tends to evolve, in a proficient hand, as a way of talking, and every person, artist, produces its own set of brushstrokes, default lines.


For all this, mainly, and maybe more importantly, Sorolla’s work is also a dialogue with Velasquez, a show of a controlled bravura. We could say Joaquin Sorolla updates the approach of the Sevillan master to the vast openness of the daylight, expanding the corpus of such approach beyond the dark rooms of the royal palaces bringing it to the sunburnt beaches of the lightful Mediterranean.


Didn’t Manet do that before him? Whistler/ Sargent? some critics also might say that his works were pastiches (6), but I digress since whatever influence could have existed have passed before trough French influence and that one had drunk first, questioned by the existence of photography, on Velasquez source, full of an optical freshness Avant-la-Lettre. Yes, those focused on the genealogical tree of the avant-gardes and the canonical modernity of the second half of the 20th century might not find in Sorolla what they look for, wary of some corseted and blind academicism of the past.


Others-maybe painters themselves-will look at Sorolla’s work for what it is: a dialogue of colour and form, because Sorolla, like Velasquez, belongs to the group of painter’s painters and of those artists that, like Paolo Veronese, left a work that needs to be seen above anything else in terms of pigment, perception and vibration of colour and whose work is there for us not to be thought but to enjoy.