Of brushes, cogs and springs 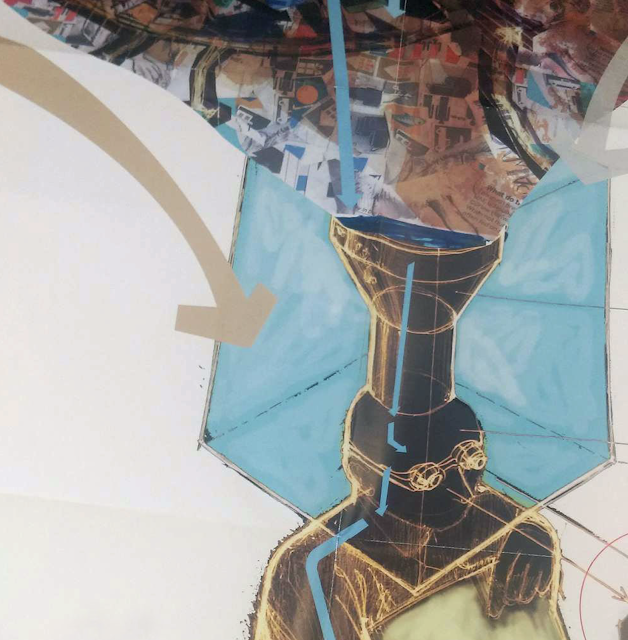 The story goes like this: a Venetian trader goes to Istambul, where he buys some colour pigments, among them lapislazuli, brought all the way from the remote Afghanistan, a mineral so precious as beautiful and rare. And of course, back in Venice, the trader sells those pigments profitably, as traders do. Trade is good for Venice, in the middle of the Mediterranean, and the city's painters, colourful and vivacious creators, show it in their canvases: Titian,Tintoretto, Veronese, the Bellini brothers. Colour and light. Expression. Creation. Joy. And business, good bussiness. Beyond the Alps, in Northern Europe, we might name as well Albretch Dürer, Lucas Cranach. Peter Paul Rubens. Back in Italy we could mention , Gian Lorenzo Bernini. What do they have in common? All of them managed in one way or another to expand their artistic practice through business acumen, assembling a behind-the-scenes machinery of trade, offer and demand going beyond the aesthetic notions of style and meaning.

It is a common idea that, we, in our daily life, see art as an ethereal, poetic creation, a thing that is done-and should be done-for arts's sake. Which is good and right. However, someone, somehow, as the Venetian trader we spoke about, someone needs to put the materials on the table. Nowadays, the study and analysis of this act are grouped under the terms of Creative Economy, Creative Industry or Orange Economy.

All human activities are part of economic cycles, and the creative act is not the exception. The creative sector, because of its very informal nature has not been studied enough. Its potential is essential as another anchor for the diversification of many national economies. Neither is the definition a uniform one between the academics, especially when setting the boundaries of what activities or disciplines are included.

However, economic studies are indeed possible where there is information, and data collection has been key to policies since millennial times, from the collection of taxes to the organization of a society. Nowadays, no group of industries can work without harnessing the power of big data, and the creative economy is no exception. How to the creative economy benefit from the data, both economically and creatively?

This last question takes us to the fact that data visualization is the top layer of the big data compound, the one we interact with. The world of information for the big public will be visual. Also, data visualizations are the new image of our times, as we grapple with complexity. Data has been visualized also from the times of the paper and parchment but was a painstaking process. Interfaces have changed that, and DataViz is everywhere, from Fitbit to the stock market. So data visualization might be the interface by excellence in the future.

intellectual Property and privacy are two inerteesting element to see in the development of cratoives economies.

What is the relationship between three axes: creative economy, data and visualization?

One answer to this is the new data symbol, the new data image, the new data meaning. After all, the symbol, the image and the meaning are the ways we understand reality, the tools we already have to grasp anything. As much as many other sectors, the creative industries have been impacted by the use of data, not only as of the back end of the business side but also in the front end, as creative economies usually delve into the daily life to gather the material for the content they create. Since that is the case, data is each time more and more present in the way these industries generate value. You will see that at each conference about business in the sector.

Information is consumed mainly through visual interfaces nowadays, and the art and science of how this information is displayed in the myriad of devices we found ourselves interacting with from dawn to right is a field of knowledge that mix statistics, computer science and visual acumen. But the influence of this fact goes far beyond the technical spectrum, as the way we consume the information defines our decision at multiple levels, none the least the social and emotional ones. Maybe is a question of redefining the roles it is said, and maybe it is true.

In the real world, beyond models and hypothesis, certainly to analyze the causes of the changes at a bigger level is like analyzing the movement of one wave in isolation; you can't have a picture of all the factors that make the ocean ebb and flow. But it is also true that overviews are made by the gathering of small, simple observations. Thus in this new face, design becomes the bridge between multiple disciplines in an era where academic definition get blurred, once again, by the wind of progress and development.