Of heads and gates 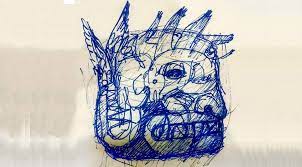 The heads become a repository of movement and tension, with their confused shapes formed by the disordered aggregation of multiple beings, contorted, ludicrously, to fit that container that resembles the portrait of a person, of someone, but in reality is not more than the portmanteau of the struggle inside, frozen unceremoniously in the lines and scribbles of each drawing. Other drawings, must be said, are a more faithful expression of Kandinsky's dictum of modern art where a line is a point that travels, sinuously and dizzyingly going around and around the surface of the paper, shaping somehow a face, an eye, a gaze. Nevertheless, the heads shown here are portraits of confusion and disarray.

As these heads take their inspiration from the stone-carved ones that used to be at the entrance of the ancient temples of lost cultures in the Andes, like in the case of what has become known as the Chavin civilisation, we might wonder if this was indeed the same spirit that inspired those to be created by our ancestors, and aggregations of tremors, of purposes of thought, irremediably confused in an obelisk a stela a stone, or maybe they were diagrams that finished somehow more explicit in their emotions that intended. Or maybe not. The heads were guardians of temples and sacred spaces, as in other cultures were the winged bulls. The gates they protected were also the symbol of a frontier of a boundary of a Kafkian wall where the unknown was protected. But they were also a symbol of exclusion. Depending on which side of the gate you were on.