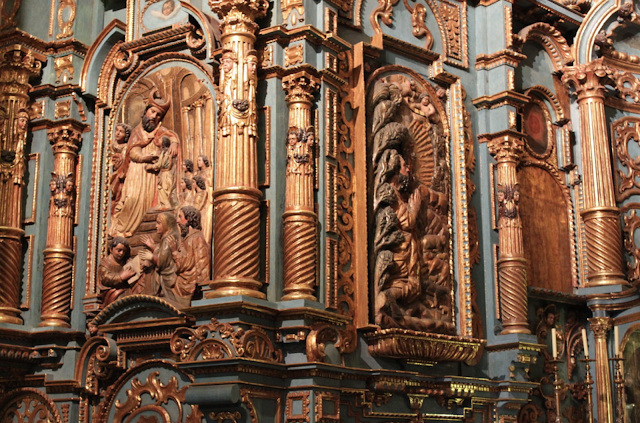 I had a long love for the old city, was a nostalgic, delusional one of a past that was basically not the present and where things were to start different and probably better. So when Julia Ortiz told me she was making an internship in the cathedral of the city, I jumped to ask her if I can join. She gave me the phone number of Jaime Rosan, father of Victor, sculptor and Wilber, musician. and husband of Georgina, also painter like him. So many time I have walked around those streets of forgotten balconies and shadows that I was more than happy when it was my turn to go there. Lima, the colonial city was waiting for me, dusty and old, forgotten but not as much as today. Today, if I pass by, I try to not think much of the state of decay in which the city is. For most of the people, that part of the city is just a necessary step on the way home at best and a noisy neighborhood of dark streets at worst.

It was 1997 in their workshop, being both restaurators of long trajectory. The workshop ws located in the right lateral nave (as seen from the entrance), flanking the main altar. It occupies at least three crucery vaults, one after the other, and the main entrance was from the back of the cathedral if I remember well. Over there, three long tables where used to work.  over there , the retable of the Inmaculate Conception was disassembled and restored. Students from the Faculty of Arts made an internship there, mainly from specialties of painting and sculpture. among them Eva Centeno, Angela Quispe, Ernesto de la Cruz, Susana Venegas, Julia Ortiz, Mariela Garibay, Evelyn Nuñez. There were also of course, students from Bellas Artes.  Nacho was the gold stuffer, working masked and silently, then the other two brothers worked as carpenters I think they were surnamed Palma and other two assistants, they were the right hand of Jaime Rosan.

Sometimes when arriving early you could catch some of the chorus practicing in the main nave. After 9 probably, the museum opened  its doors and we do not venture beyond the workshop space. I remember the museum was in the sacristy. The reliefs of the disassembled altar were placed on strong, sturdy easels to be restored, or other times placed on big tables according to the task at hand.

The reliefs where usually complex escenes fromthe life of the virgin. there were two layers of retouch from different stages, one robably from the 19 or 20 century other maybe I guess fron xvii and the earlier one might be from 17th and 18th centuries maybr. We remove them with a bisturi and a paint renover carefully applied with timind. between the layers there were stucco and bol painting for the gold. I stayef there half a year if I re,embrer well. I used to arrive at 9 in the morning and leave at 6 in the afternoon. from the noisy streets of the center town to my house in Lince.

Once Mr Rosan called me to help him to restore an sculpture of San Benito in his home in Pueblo Libre, some streets near Universitaria avenue in the opposite side of the PUCP. The sculpture was painted in a kind of dark green and basically What I have to do is to draw over it the lines of the original remains still visible in parts of the arm and the legs. It was there where we have some discussion over aesthetics, on figurativism and drawing. Being he a skillful crafstman, he have a delight in showing sprezzatura both in action and in opinion. At one point we were talking if it was the same to see a picture of the Moises or to see it in real life. At other point we were talking about the Cuzco school of painting and I think that maybe lead us to the previously mentioned topic. I guess he found it funny , being myself so ignorant in terms of what I was reading in aesthetics and philosophy.

The time I spent there was short but nevertheless it was an experience I cherish much until today.