Paper planes: A person wants to buy an nft 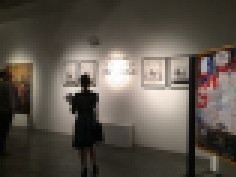 One winter morning, a person enters a gallery of non-fungible-tokens. Maybe it is Sunday, or maybe in the afternoon of a weekday or maybe it is the opening of the exhibition, full of glasses and canapes, consumed with an appropriate amount of social distancing.

It is most likely that this person have not the slightest idea about what a non-fungible-token is, even less what HEC was, or what does these abstruse names mean: Bitcoin, Ethereum, Tezos, Cardamo, etc. Why should they? after all, it is still 2022, there is still oxygen available and the Antartica still exists and people write in English. Mad Max/ Blade Runner place the world it is not, neither a Back to the Future 1,2,3 incarnation.

Anyway, the person start walking around these screens hanged on thew walls, seeing all this animated images, that are, however, not movies: they are not necessarily telling a story other than the one implied by its symbolism or gestalt. They are images that continuously loop, an endless movement visible thanks to the electric energy behind the devices.

But do not despair, because as well as these planimetric cages of tumultuous light, there are physical objects. Physical objects, yes, like the ones you saw a while ago in the consecrated books at your local library. Objects made of bronze, stone, marble. Objects made of metal, of paper, of spread pigment on stretched fabric. There are portraits, landscapes, still lives and other genres which you, oh visitor, most probably are familiar with.

The person that entered the gallery is familiar with them too, and soon is absorbed by the tridimensional contemplation of such tangible objects to such degree that in a momentum of affection, aesthetic fog and impulsivity, decides to buy one of the pieces. Wait, didn't you say this was a gallery of non fungible tokens? Well, yes, but it happens that now they are doing a hybrid exhibition of digital and virtual objects. Or no contradiction there, they are, it just happens that they are selling physical objects as well. Via NFTs.

But how do you buy/sell an NFT? How do I consume an NFT? That is a place where we are not quite yet. Or are we?

You see, the person in the gallery has these same questions floating around, and this is noticed by the gallery assistant, which kindly approaches to quell any question. The person wants to buy a drawing made on paper a beautifully framed, because still thinks a tangible object is something else. Nevertheless, this is an NFT gallery and they deal with cryptocurrency transactions, so the payment should be made in such way. But the person only have dirhams, aka fiat money. What to do?

The gallery assistant says no worries, please come with me and take the person to a nice room where there is anther member of the gallery staff, seated in a desk with three computers

The teller, a digital-savy person, just receives your money, amybe trough a swap of your credit card, nad proceeds to type on the keybard of the desktop computer. What is thew teller doing? Is creating a virtual wallet for you, maybe a metamask, maybe a temple. The teller writes the seed phrases, the magic sesamo words that warrant the access to the digital wallet, and creates the password for you. You might be asked to choose such password. The teller then take note of your wallet address and proceeds, maybe in other computer to avoid confusion, to open another wallet, the wallet of the gallery. This second wallet is already loaded with crytocurrency, and the teller only needs to calculate the amount of money the client has paid, calculate its conversion into cryptocurrency and then transfer that amount to the currency that has been just created for you. After that, the teller goes to that first wallet and accepts the transfer, and inmediatly goes to the marketplace/virtual gallery where the nft is being sold, and buys it, returning back to the gallery's wallet to accept this last transaction. Alas now the token that is the nft belongs to the customer, assigning with it the ownership of the physical work that was the original aim of the transaction.

All this while the customer,  still seated there, unaware of such technicalities, check some paintings on the wall.

The teller smiles, and says:

- We are done. Congratulations!

While doing this, the teller extends the customer a paper, printed with all the details of the transaction made, token number, wallet numbers, title of the work, etc, etc. under the title: "certificate of Ownership", a paper signed by the owner gallery.

The person goes to see the assisstant to coordinate the delivery of the artwork.

Here there are two things. One is about art, the other about economy, and the two are linked. There is some confusion about what an NFT is, and how it realtes to cryptocurrency.

First the impulse of NFt in the art world as opposed to other ways was the selling card that artists dealing with animation CGI and other virtual creation techniques had a hard time sellingtheir works in a way that was similar to the traditional market. Their art was not necessarily recognised as a value in itself . NFTs happening in the digital/virtual world. Then it expanded to more traditional art practices.

Thi sspontaneous proces led to a lot of confusion about what is an NFT. Is it videoart? Is it animation? Is  it web art?. Is it 3D? Yes, sure.

A painting can be an NFT? Yes. A drawing? Yes. An sculpture. Also yes.

Yes, because NFT as well as a monetary thing is also a notarial, evidential thing, which actually are two inherent aspects of economy. Thing of all the transactions and how sure you are the how you sepnd your money and that the bank back you in the registry of this transactions. And the thing is that a transaction once defined as a proposal that operates within a system, could be anything. The proposal is defined by the seller, given the assessment made of the potential, asumed value of such proposition. Do people will agree that the proposal has value? Is it fair? Is it logic? Is it sensible?

Now, lets say you buy an only digital NFT, how do you, for the lack of a better word (world), how do you consume it? Where do you storage it?  After all is your money, invested. Then the question is Who will think such a thing has value? that is fair , logic and sensible to pay for a digital image to be consumed, observed, enjoyed and reflected upon only trough devices. The jury is open on that , but we can guess that the upcoming generations of digital natives, that is who.

Now, why to do all this if fiat money works the same way. It might be, and we continue speculating, it might be that the progressive integration of AI , deep learning etc into our lives and the crescent automatization makes more probable that a person interact with systems guide by these technologies that work and create a such speed that is literally, inhuman. So blockchain might be seen as a bridge in the corresponding way of transaction with these new situations. A currency made of codes, as before we have printed money, in the age of Gutenberg, or minted money as was since the Metal Ages.

the creatorsof these new images have found a way to rate and validate their art in a community. against the fluidity of the digital reproducibility

what is your price?

thge economic sense is in the defintion of a transaction a transaction is delimited by the boundaries of the consensus and the offer made and accepted. this offer can be physical , digital physical only digital the thing is that the trnasactionis registeresd and made with tokens be this made of metalic circles with a stamp on it, on printed papers or in digital codes

Crypto is about consensus and network understanding via the trick of encoding your ticket number in the non stopping train of the blockchain, and based in the postulate that such things are almost unforgeable

How they do they give you the money to your teller? Just come with me and have a seat, the assistant ssays.

There  are many questions about nft, not being knowledgeable but being only familiar wity the surface I can tell that there is an overlap un the understanding

maybe the new society needs a new transaction vehicle suited to the developments, the complexity of the digital world can not be retrieved via the fiat money.

nevertheless this is not without challenges from climate change to cybersecurity