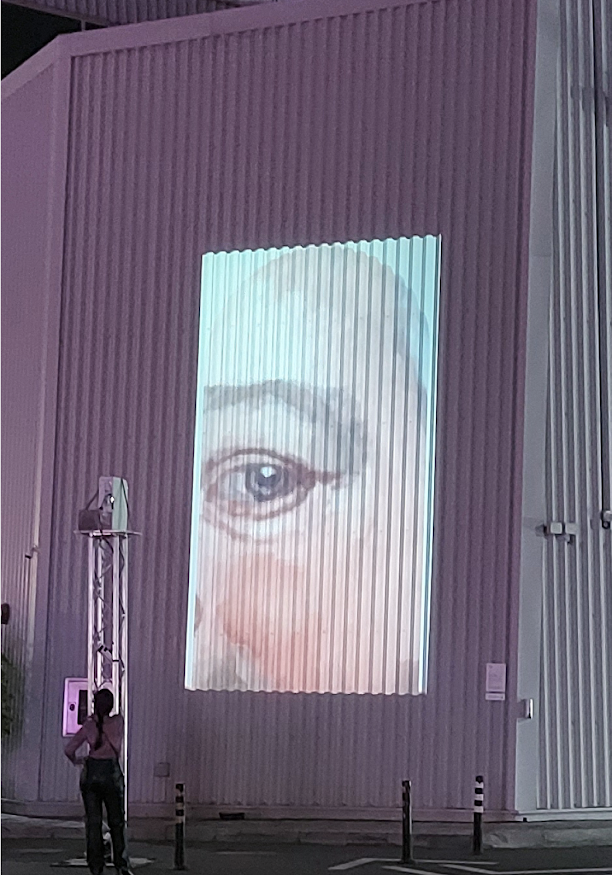 "The perseverance of the image, leaving tumultuous echoes of the self in a captured piece of time in the hands of the space, light, shape, colour and a fleeting meaning. The sign, the image-in-waiting, interrogated by the movement: A-B=C, where A=movie/video, B: is everything that comes before, painting, visual storytelling conventions; C: pure movement. This divided, separated triptych is an exploration of the substance of such nature."

The perseverance of the image:

( how movement is built, on the idea of the image, remaining, perceptually, in the eye

like in a zoetrope, but also the screen building a line by line the image at high speed but we see it as a continuous thing, a kinetic trompe l'oeil, but also how the image (the projection) is retained even if eventually could be “broken” by the objects placed in front of it)

Hence, the echoes of the tumultuous self

(linking also with a drive to live or remain, persevere as an existing thing, throwing a comparison to an individual, a person and ephemerality )

(the movement, of timely nature, is encapsulated in the work. Colour, space shape are building blocks of perceptual elements also used in theories of design, like Gestalt. The adjective of the electric goes for the nature of video and the projector, its nature coded technically different from analogue or print colour RGB-CMYK and also pointing out a time context)

(the dynamics of interpretation of any image)

The objects allure, the feeling of strangeness in daily life and also the technology power in our lives. participated consistently, these sessions started before the pandemic but I came back and took a new sense to them during the isolation and quarantine. Our relationship with the outer world, redefined by the presence of the virus, to the tangibility of things, here signalled by the objects. 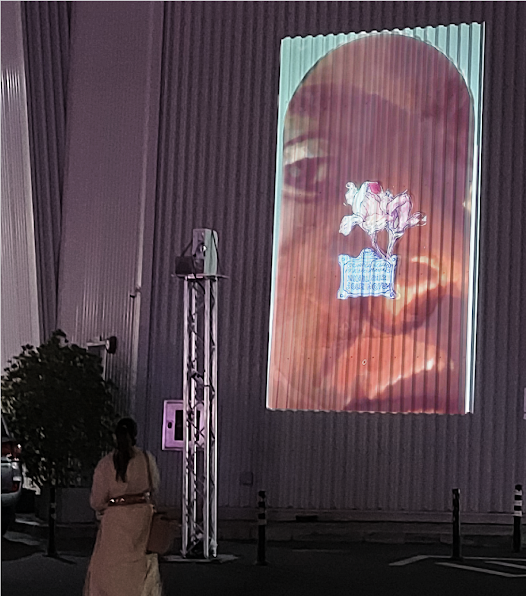 The video progresses through a kind of numbered chapters (a formal device giving the impression of order, of a methodic argumentation, which the work is not). Every section starts with the detail of a briefly looping image (Roslin, Gerome), followed by recorded projection sessions. Within these sessions, the projected videos are captured processes of digitally painted reproductions of specific artworks (Laso, Pereda, Sabogal, each one alluding to a different topic: alterity, ephemerality, identity) in the manner of academic tradition, where copying was used as a learning tool. Intermittently, some messages appear, upside down, or reversed, almost disappearing instantaneously amidst the flow of images. The mediated image is cut down to pieces and reassembled, adding one more layer of mediation. Finally, the continuous movement across the sections stops at the end and shows the objects, illuminated but devoid of movement, then, the skull, giving way to an empty frame, that however, because of the loop, starts again, hence the artifice, the scaffolding of evading temporality is achieved, at least, momentarily. Perpetuum mobile.

What is in a movement? Who/what perspires of an inner motion and who/what doesn’t? Who/what/when moves, orbital, peripherally, and who/when/what is axial, permanent? Records of an attempt to visualize the nature of things through framing them in an infructuous manner. The elements are oversized, the movement as well, to highlight the materiality in the game of lights. The object of exploration is the movement as the element of contemplation in the electric image, the ghost in the shell/the objects, the video, the platonic cave, the allure of fire. But also the projection of a projection; the image experience is inter-mediated, presented from a second-hand source, noisy, distorted and blatantly filtered. But is our common, prosaic, daily perception any different? This video emphasises the elements of the installations, the lamp, the frame. Recordings of previous iterations of the piece are shown, delivering a transition between the pieces at both extremes of the main corridor, via elements that appear at both scenes. Lastly, some moments are not even footage of anything - like the red circle- just the pure, random movement achieved through randomness. How can we trust the meaning of all this?

This installation takes advantage of the objects already in Al Serkal Avenue ( i.e. a repurposed vintage car) to mount an ephemeral structure that plays in counterpoint to the projection. The objects, stranded without apparent reason during daylight, assume a sense of purpose when the projection starts at night, animated by the continuous flow of the images. The contradiction between the static and the flowing is the encounter point of the tangible experience. Amidst the clamours of meta/hyper/virtuality-reality, a redefinition of our perceptual world, an inquiry at the walls of the Cartesian fortress-the ghost in the shell, ungraspable, the bath in the Heraclitus' river, with all the novelty of a mediaeval stained glass. Vanitas vanitatum, omnia vanitas est, the image is not different from us. What will remain of it? Or is the object a more proper comparison, animated by the oscillating light until it is no more, the lights switched off?. Two videos are shown, recordings of drawing sessions: Peredas’ "Allegory of vanity" and Laso’s "The three races"; identity in time and identity in space, projected through the rusty, abandoned silhouette of the automobile and the assembled/disassembled objects placed on the wall.

2. Gerome's constructed portrait gives way to Laso's Indian potter (Inhabitant of the Peruvian mountains), a painting by Francisco Laso, a painter trained in Paris, presented at the Paris international Expo, considered not Peruvian enough for the idea of the French public, a curious case of dissonance between reality and expectations from the Other. This painting dialogues with two other images: another Laso painting and a Sabogal painting.

3 Pereda: the allegory of vanity. The tradition of Vanitas paintings works that reminded of the transience of things, is an established tradition of the Spanish baroque. Inscribed in the spirit of the Contrareforma.

4. Footage Sabogal A contrasting definition of Peruvian, Andean identity, equally confused through the motions. Sabogal's work was part of a wider attempt to rethink, almost 50 years after Laso's work, what does it mean to be Peruvian.

5; Bouguereau's painting. Perpetuum Mobile: The attempt by intellectuals of past time to discover a source of permanent energy. Curiously, clocks( time measurement) were a case study to develop these attempts ( from clepsydras to electric watches). Nothing, the light is on but there is no movement. The skulls likewise. The end of motion. However, the projections trick the nothingness, looping continuously.

1) Style and technique as factors in communication as part of the perception.

2) Why paintings? A part of the work explores the system of drawing, the relativity of colour in the perceptual world. Colour is influenced by light in the environment as by the light and colour of surrounding objects.

3) Mediated experience. The game of references in Las Hilanderas, a painting by Titian, copied by Rubens, being contemplated in a painting by Velazquez about the art of painting, about knowledge and life in a game of Chinese boxes, articulating that every knowledge/experience is mediated ( a literary device, like also Name of the Rose and Quixote).

4) Allegedly, Sorolla, was in the same situation when he painted the canvas for the Hispanic Society.

5) the willful misreading saves us.

14) Sontag, Susan. On style and Against Interpretation, 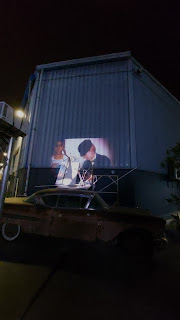