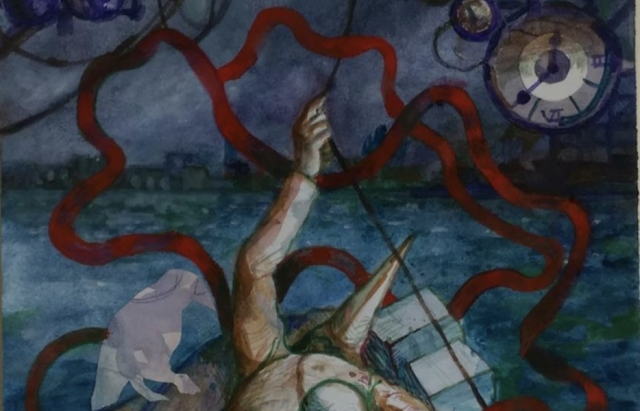 In hindsight, it was not the end of the world. Yet. Sometimes, after reading the news, I wonder if I should/might add a question mark to that sentence, change the tense. But maybe not, regardless of what happens. Because maybe the initial sentence is to be considered as Fukuyama's end of history is considered today, more an expression of perplexity in front of massive changes. Maybe the end of a kind of world. Maybe the end of our understanding of the world if there ever was something reliably to called like that.

In hindsight, easy to said that now, while seated at the office one afternoon of the high summer of the desert, and watching some videos in the mobile, that black, shiny and slippery slab to which we link each one of us to the times of our existence; watching there, forgetting actually which ones. But a year ago, it was difficult to know.

Yet, we are still here.
Day after day, in those weeks and months, I was afraid to see some social media as the newsfeed was becoming something more similar to an updating obituary, relatives, friends, friends of friends, colleagues, neighbours, appearing in them with the inevitability of a corroding disease, a fateful plague. Time dissolved itself in an endless, meaningless repetition, a danger always looming around while you received the announcement for the curfew timings in your phone. But my experience was nothing, really, nothing compared to the thousands of people that saw their world turned upside down, maybe forever, in those life-changing days.

Some of them are not here anymore.

Watching videos was a passing-time entertainment during those days of uncertainty. Everyone playing a game: what if you have to do what you do for a living but without leaving your home? I am watching a ferry full of passengers pass by the flaming hills that surround the Aegean Sea, I cannot fully comprehend accurately the sign of the times. Is this it? Some people were less apocalyptic, but changes were happening anyway, accusations made, theories criticized, science demoted here and there, and fear spread because of this or because of that. Darkness and isolation, confusion.

Yes, the pandemic as such wasn't, as the specialist said, an X-factor. But the domino effect of the multi-systemic environment, from health to transport, was not expected. Touch and proximity. Banned. Affection accused the impact of that prohibition, many times.

I wear a mask these days, I wore one those days, and I am vaccinated, this information alone still is something that does not tell you much (or does it says a lot right now? the ideological divide engulfed such topics very early, dividing people in passionate and opinionated sides. Will be this a crucially public information to disclose, or, as Novak Djokovic implied, is it strictly personal?.

In the future, when the fog and the dust of these moments had settled and we could see the clarity so needed now. Will we?

I confess I wasn't -I am not- Newton, neither Dafoe, some of the figures who were quoted or referred through many articles in the news with the aim of lifting the spirited of the confused. No, I wasn't, so I didn't write or discovered or thought anything of value in those days, just plainly going from one day to another, losing the feeble grasp of time and thinking of what will happen just to forget that and living over my past years or past days.

Being hidden, in the darkness that surrounds the transitions of the afternoon to the evening, watching the luminous, blinking TV, somehow, without going out, reminded me, reasonably or not, those days of childhood when we thought the bombs and the recurrent shutdown of electricity in the city every time a electricity tower was bombed, where the beginning of the end for us. Those were the feelings in the air, the fear, and again, the foggy, ethereal sensation of uncertainty.

The mind works in mysterious ways, one of them might be an idea of patterns, repetitions, iterations of circles that go round and round like those men in the wheel of fortune, unaware of the reasons for the changing fortune. In the novel "Cien años de Soledad"(One hundred years of solitude), you could not avoid the sensation, shared by some of the characters, that in the tumultuous flow of time, there was, unassuming, shy, a subtle undercurrent of things repeating themselves, of being possible to bath yourself twice in the same river, because everything was cyclic.

It might be for that very same reason that somehow I found relief in a convoluted German series called Dark, which, tellingly, started with a countdown to the end of the world.

Like in Dark, like in the Ecclesiastes, like in Cien Años de Soledad. What it was, will be. Nothing is new under the sun, and that the foolishness of every human enterprise was tragicomically at the same time predictable and unavoidable, for everyone to see, but also for everyone to fulfil, unaware, sentient but hypnotically, either like Chamberlain coming back from Berlin or Moctezuma receiving Hernan Cortes.