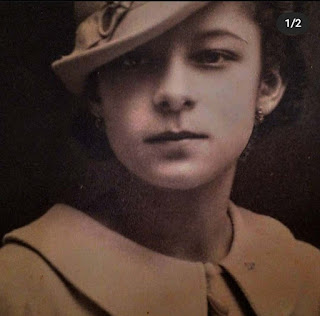 I remembered, when I woke up, that I had just seen my grandfather. We were seated in a long table, full of dishes,a withe tablecloth, in the middle of the small lane that was at the entrance of the "quinta" or group of apartments where we lived. This small space, long and narrow as of 4 meters wide, maximum, and 10 height (because of the surrounding buildings), with white painted walls and  a red floor was were the table was and all of us: my mum, my grandma, other relatives, maybe my cousins and my uncles.My grandfather was there, and I was showing him, of all things, how to use Google Maps. He was wearing one of his suits, a brown suit, and his glass of carey. He was sympathetic and alert to my explanations. However his eyes were a little strange,and he looked a little bulky of contexture for what I knew. At that moment it looked somehow strange to me, but now I think it was just the effect of the thick lenses he used for his myopia and increasing cataracts. It was then that he said he was going to check the news in the newspaper stall at the end of the street and he disappeared. I thought it was strange, and I told so to my mother, saying: I thing he is not gonna come back.

Well everything starts with Johari's window. The way others perceive us and who we are in aspect that are by definition beyond us, but that nevertheless are part of who we are. Then, if that is so, grief is more than sorrow, because the nearer the person the more information they have about that non-knowable self of us.

When they die, they take that parts of us with them. The very memory of us seen from a second/third person view is gone. We, intuitively know this, and the pain is almost physical.
Know thyself might be interpreted in the same way. Not only knowing yourself from your point of view but knowing yourself in the others' perception. The same goes for the dictum to care for the other as you would care for yourself.

Some months ago my mother sent me the photos of these photos, photos that I couldn't bring with myself because they are in the family album she keeps at home. She doesn't remember, but when I tried to brought it with me she said me:
-Why? These are the photos of MY parents.
Or something along that line. She was right. What I brought with me were the other pictures, the one from people we barely know, but whose resemblance, kept in those images, was important to him.

My grandfather, son of Nicanor, born in 1913, here incredibly young, tanned by the sun, in the company of women I still haven't identified - except perhaps the woman who puts his hand on her shoulder: it could be my grandmother, but I couldn't be sure, which is more frustrating - in a probably family photo, from which the context has been lost, perhaps irretrievably. One reason why I post this here, to prevent the image, like everything, like me, from disappearing.
Probably Nicanor, as a child, sitting and posing like an adult, before adolescence was invented. Next to this metal plate, pockmarked and rusted, was a glass negative print. Both hidden in the thick wooden trunk that my grandfather kept under his bed, all full of memories and vestiges of the previous generation, perhaps as executor of those paternal memories banished by the rest of his siblings from family memory. Perhaps if he read these lines he would be upset. I hope not.
Don Nicanor's electoral book. Nicanor once had a horse. And many lawsuits. With his brothers, because of the inheritance from his father, Andres. I still remember the leather suitcase, packed to the brim with sealed, typed and handwritten papers, yellowed, passing evidence of those fraternal procedures. My grandfather kept it jealously, until the last day of it. My mother can't wait to get rid of her, if she hasn't already.
Mauro was the eldest of seven siblings: Victoria, Francisco, Carlos, Maria, Otilio, Ernesto. Son of Juana Maria Hernandez and Nicasio Cantos Lavalle, grandson of Andres Cantos Miranda, who died in 1918, the year the First World War ended and the year, now it makes more sense, the influenza pandemic swapped the world. I write all of this before I forget it, as I have forgotten many things already.
One of his first works was in the Investigations Police, and then in the Ministry of the Interior, where he worked as Secretary to the Minister before retiring. He belonged to the brotherhood of San Judas Tadeo, the one from the parish of Santa Ana, where there is until today a monument to the Italian aademic Antonio Raimondi, some steps nearby. He suffered a stroke from which he was able to recover through cognitive and physical therapy. Married to my grandmother Manuela Dominga,for 45 years, two children were born of that union, Victor Andres, my uncle, and Maria Angelica, my mother.
Tango was very much his musical preference, not so much boleros.
On another occasion, he helped me write some assignments in my notebook,of lined pages, khaki cover and slightly yellowish creamy paper that they bought me in the bookstore to use in school, like that little note about the war between Iran and Iraq, which was on television and that I knew so little about.
From his collection of books I fed myself in childhood, from the Peruvian Traditions of Ricardo Palma, the Thousand Nights and One Night translated by J.C. Mardrus and Les Miserables by Victor Hugo to Three Sad Tigers by Guillermo Cabrera Infante and Psychopathology of Daily Life by Sigmund Freud and the Art of Living by Lin Yu Tang. Over there I also saw a book by Lombroso, although I didn't read it. There was a collection of Latin American authors, from Sebastian Salazar Bondy to Jorge Icaza, Alejo Carpentier and Romulo Vargas.
During the wake I contemplated it and I did not stop finding the similarity with the photo, in black and white on plain paper, of General Petain on his deathbed as it was in another of the books I had, the famous trial book in history.
Oh, grandfather! if I only could tell you how things are going these days...

He didn't know then- how could he? why should he? - that he will die one night, in another era, in another world, postcolonial and postmodern, deconstructed, in the summer of 1993 in Lima, then a multi-formed, multicultural city, coming back from a visit to the doctor in front of all of us. That day I had been reading one of the volumes of the History of the Republic of Peru by Jorge Basadre, documenting myself to make a drawing of one of the battles of the Pacific War on some sheets of white paper. Specifically, the battle of Lima in 1883. But that doesn't matter. Because, should we, given the imaginary opportunity, know about our deaths? Should we know about our future? That would be cruel. Ignorance is sometimes a bliss. What we should know, rather, is how our dear ones will fare in the future, when we are not here. Our family, our friends, our places. That would make up for our transient stay in this world, if there is such a thing, I guess.