poem 01, sent to on writing contest, not selected 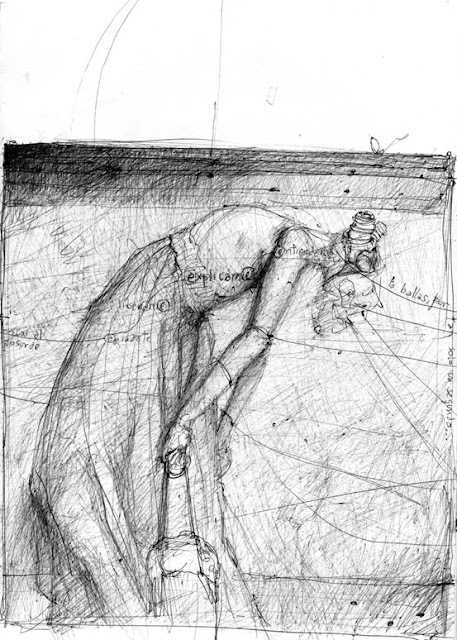 Please turn on the oven, for the food is almost ready, and the bread is warm.
And I will put my head inside, and flowers will grow, dreams will be born , and ideas will come to light, so they can die  putrid  in this world.

and  the skin will burn, after the crown fall from the eyes,
while the sound of the wind protrudes itself from the horizon lost,
in the silver water of the illusion.

rage and light, battery and love.

Still  my skull is in my hands,
I do not have yet a new brand,
and where I am now, no more I am.

But after the first click, the buttons will have reassigned their events,
and event listeners will be removed, replaced by new ones.

and the same will happen, as it has been said,
with the second one,
and the lurid third click,
forever again.

battery and love,
electricity and lust,
neon and rage,
smoke and flow.
Click, click, click
Touch, touch touch
Press, press , press
Scroll, scroll, scroll
-All right
-What is in the radio?
-Oh well, I do not know, will check
but I am no more
barely from the distance //
now
are the  reference in this world only
the towers I see,
floating as overlords,
I have been  there
in the mechanical, eternal ramps and the stairs hypnotically they create
the capture of the skies in the mirroring floors of the aromatized lounge
and also inside the reflective elevator cage
*//
el silencio./ the silence
el nino buscando algo en la oscuridad/ the child looking for something in the darkness
la luz del reflector/the spotlight
el banquer/ the banker
/ the guardian
/the chorus
/ the tower
/the pool
/the hill
the desert
the woman
{}
/*

*/
MOMENT 1:
slowly like in a stage, develop the moments of the piece
a white screen is everything we see at the beginning
Beep, beep.  The piano sounded slowly in the neighbours house, beyond the gray walls, painted with an undiscernible colors slowly built up by the feet of  person who reclining over them to kiss, to think, to smoke to cry in many night of cold silence.
An unfinished cigar, over the top of the cornice, slowly, also, dying slowly away its last fire, unnoticed.
___________________________________________
guide for smartphone:
also for the moments, the poem lines should appear one at a time filling the whole
screen in smartphone, so they can be read slowly maybe
___________________________________________
The flowers, always the flowers, red and purple, they appear
and the beings-also-appear, multiformed, bold, dragging themselves through the floor
to open then their wings and fly to the highest roof
they are the buttons, the triggers, the starters
later the background video appears but with low opacity
as always backgrounds do
but later appears the headless man seated over the box
The headles man
the woman in the box
___________________________________________
MOMENT  2
And at the end, I was in a Flemish winter, I guess, but I dont know, on a second floor, of tiled floors, of brown -framed windows, furnished with red Paracas textiles along all the walls, with all the mythical animals as witnesses and chorus, waiting.
The oven was shut off. The boiler was down. The bells were still hangimg. At the right, an empty glass. To the left of the first corner, a paper of yesterdays.
________________________________________________
The crown in my eyes dilutes trough the hands like a viscous liquid
slowly, rhythmically like a snake from my eyes
The hair is white now, dusty and old
fragile and broken by times
of yore and sore
the buttons trigger the different actions, like:
one starts creating flowers randomly
other starts creating random skulls
other move the parallax effect, disappearing the man and letting the woman appear
other plays a video