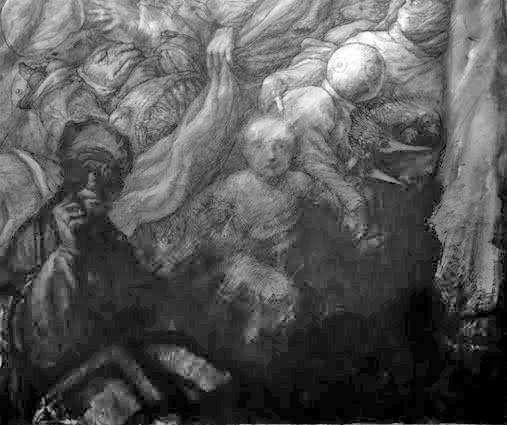 Not that we mind. The city, as I remember it, is grey, flat, dusty. Boxes and boxes, placed along, together. Wires crossing the air over the cars, embroiled in complex Gordian knots here and there. The city could be made also of yellowish pages, paperback edition. Introduction (cof, cof, ahem) Ehem, ehem. Good morning dear visitors. The collection that is the topic of this exhibition takes its name from an inscription in one of the main pieces, which shows an inscription that says: “Procession from the metropolis to the necropolis, and back again, in the city, which is the world”. ( Here pass slide 01 ). Not that we mind.

A graffiti over the wall: HE IS(interrupted, layered, geological). Yet, today I dreamed about a washing machine. A flying washing machine. And the machine was smiling, as it has a face, and eyes and a mouth and all the general things that children draw when they are required to portray a face at an early age. Early-age children, I mean. And the machine was smiling at me, and saying: " I will wash you".The horizon was of a foggy turquoise tint. And I asked, Washing me? Washing me from what? Or why? sweating and almost shouting, as the machine looked heavy and menacing flying over me; without answering my questions, it smiled again and slowly disappeared into the green fog.
The clock rang strenuously, as alarm bells do. The metallic tingling trembling around my head, already drowned deeply inside the unapologetically disordered pillows. What is this? What is this? I say without uttering a word. The light entered already by the curtain edges. Oh come on, another day to work." I am glad you have a job", the uncle has said once. He is right, I guess. And I am wrong. And because when we talk about structures that allow us to interact with the exterior world, we also can say that our clothes, therefore, are a kind of architecture of the self. The perfume is spread around, near me and a little beyond.

A- Let's buy a washing machine, I say. It is just about time.
B- Sure, honey? Just like that? Do we have enough money for that? And if so, what model?
(A scream in the background, also a song on the radio)

Economy-in upper case-can get depressed. Your economy-in lower case-also. Do we need to clarify this? Let's not get personal here. Although how personal can this be? Everyone got stuck within four walls during the last years, mirroring the emptiness with themselves, dissolving the belonging of a mind to a body in the meaninglessness of featureless days, like the half-erased pages of a confused Shrerezade. But it was Zubeidah the one who made the most astonishing transformation across the different tales of such books, from heroin and object of desire to jealous wife and antagonist. Mmmmhh.

A- Indeed we have, I guess, and well, about the model...how would I know? Am I a salesman? we will see there, at the store, let's go…
B- Yeah, you are right, neither a salesman, nor a millionaire, nor a poet, if only I would've known…what are you? .... Hey!, did you hear?
A- What? Anyway, let's buy a washing machine! I feel pumped! I feel the artist's inspiration, over there, next to the toasting machine. Now, to buy an appliance during the week, now thaaat is a traffic nightmare. But is needed.

Just to remind us-you- that, tampering here and there with some chemicals in one French morning of the December winter in 1827, Monsieur Joseph Nicephore Niepce achieved the feat of catching the light within the boundaries of a metallic plaque, and with it, the shape of the house in front of his window. Truth be told, it took him not one but many days to fix what was still a work in progress, and even then, this was not called photography, but a "heliograph". Nevertheless, because of the toxicity, he also had to wash the plaque to reveal the final image, untarnished, unblemished. The perseverance of the image, the echoes of the tumultuous self. Technologic melancholia. And yet, the stains that remained were the ones that formed the image. But what is in a name? or for that matter, what is in an image? Or a washing machine? Some boys playing football near. Hope they don’t hit us with the ball.

A- What are you talking about? Come on, get ready and go. By the way, the bill for the rent arrived yesterday, but late. Water, electricity, done. It is the only one pending. The machine must be a little thing, not childish not a Cadillac, for us to put it here (pointing to a space) without much suffering ( I remind this in the newspaper articles: "without much fanfare, they say")
B- Bla bla bla, we will sort it out. Let's go. MOVE. Give me my hat.
A-OK, OK Oh, yes sure. You know, the washing machine works round and round. It is an interesting piece of machinery, I think. Somehow, like our lives, sometimes.
B-Well...I like one with a sleek design, a la Bauhaus
A- Mmm let's buy it. Do you check the kids before coming?
B-Oh, don't remind me of them now, please.

But most importantly, many aspects of the subject in each of the pieces do not have, should not have, or must not have, according to each one’s point of view, a specific, determined symbolism linked to the overall scheme that goes further than the ones we just talked about. The sound of the cars and the motors waiting for a light that probably isn’t working. Truth is, the basic question is why? and also who? who I am, but also why I am or why I have to be, as in, why to exist if you will die anyway. The cars, the houses, the streets, all waiting to become where the wait is the being. Not that we mind.

The washing machine, over the altar of technology. You just need to press one button. One.
-Very well, here we are, let's see all the marvels around here
-But let's do it quickly, or we will find ourselves out of time
-Okkkkkk
-Did I tell you my dream?
-No, not today. Did I tell you mine?
-Well...no
-Let us keep it that way, then.
-But…
-Look! This is nice! so nice! Do you like it? Of course, you do, who wouldn't? Such glamour, such harmony, such creation....excuse me! Excuse me! (calling the sales attendant).

That does not mean the interpretation, hermetic, cryptic, is constrained to what is written here, but on the contrary, that they are part of the general scheme, a gestalt, but they are also more than that, in the same sense that any communication, memory, love attempt, have meanings or interpretations that escape the general structure of the intention for which it has been made.

C-(What now? It is half morning and I am already tired. I will sell this, I need a commission today) Yes, how can I help you?...

If you fall over the road you will feel the granularity of the pavement, the rough, dry surface like sandpaper over your body. “Foul!” shouts someone. The drivers around just sidestep the street football players, who in turn do likewise with the eventual car passing by the street. But keep in mind that if you fall you also feel the street, the city, the ground below, the heat, the whole world and a new perspective of the old, rumbling automobiles that roam the city like fishes in the rivers of that mechanical world, the arteries of a clogged living organism. “Foul!”. From the middle of the street, does the city have an end? From here, it looks infinite.
-Goooooooal!